Posted on September 20, 2011 by Heinrich Mallison

Continuing from here, let me show you some more of the wonderful dinosaurs at AMNH.

If you picture-google “AMNH dinosaur” you’ll get a lot of results showing Tyrannosaurus, Deinonychus, Triceratops, Anatotitan, and Apatosaurus. Other stuff is rarer, even the beautiful Struthiomimus specimen. The nearly perfect Plateosaurus skeleton is figured in good resolution on wikipedia, at least. The wonderful Protoceratops mounts, for example, seem not to interest people who post pictures on the Internet. Coelophysis? Diatryma? Camptosaurus? No such luck! So many others are willfully neglected. And, although most will not admit it: many scientists, if they want to know how good material is that hasn’t been published on for a long time, find that old papers and online catalogs aren’t really too much help. “Juvenile skull, broken” and “fragments” – how helpful is such an entry? It may just pieces of junk, or it may be something as wonderful as AMNH 6536. And old publications, containing drawings, not photographs – well, how much was reconstructed? How much “combined”? You never know, and sometimes, just sometimes, Google really is your friend. Thus, most of us check out the picture search, only to be disappointed: even very many prominently exhibited specimens can’t be found on the internet.* So I’ll post a few pics of these poor neglected critters. 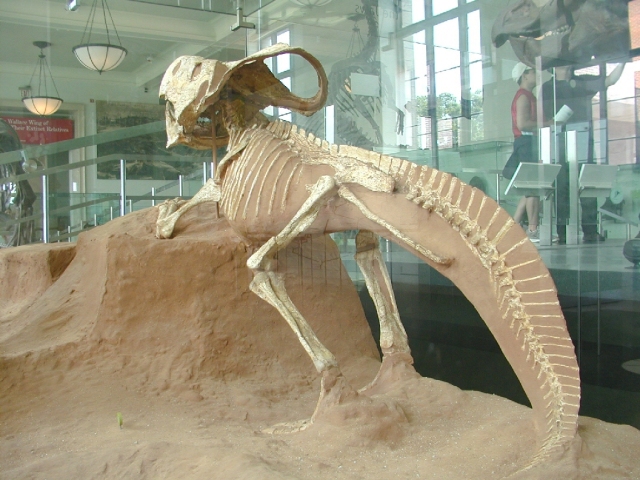 These wonderful skeletons were found by Roy Chapman Andrews‘ Cental Asiatic Expeditions – one of the paleontologically most awesome failures of paleoanthropology: the hoped-for ancient humans were never found, but a treasure trove of fossil animals. The psittacosaurs I pictured earlier stem from the same campaign.

One reason why some specimens are so rarely depicted on the Internet can be seen in the above photographs: the glass cages that house most AMNH exhibit pieces. In the old-style, dark exhibition halls such as the Hall of Reptiles, this is not that much of a problem. But the dinosaur exhibits have large windows and historic lamps all over the place. In the mornings this is tolerable, in the afternoon, when the sun shines in, there are more reflections on each picture than dinosaur bones. Add to that the rather narrow ails between many specimens, which mean that you can’t really step far enough away to get a complete picture and can’t hunt for a position that minimizes reflections. And then the wall mounts are in a white plaster-like material, so that dark bones merge into one black mass unless you’re very careful with camera settings. I had the luxury of having a full week, so I wasn’t in any hurry when taking my pictures. Still, most of them suffer from lighting problems of all sorts. And then there’s the many visitors pushing through – on full days it is impossible to take any picture without getting a LOAD of stinkin’ mammals on it, too.

I tried to edit many of my pictures, mostly by darkening and increasing contrast on the areas where windows reflected on the glass. it helps, but it’s not perfect. Here’s an example.

I very much like this specimen, mostly because I prefer (semi-)articulated fossils to be left in position. Often, there is much information contained that gets lost if bones are separated during preparation. OK, you can’t keep half a sauropod in one piece, but small animals make for field jackets that can be handled with an A-frame and a large truck. So why split them up in the field? And, more important, why ruin the data brought in from the field during peparation? The shiny digital future (more there soon!) alters this a bit, by allowing the high resolution laser scanning or CT scanning of articulated small specimens. Thus, we can retain the information in digital form (and no, taking pictures is not good enough!), and still have the separated bones for easier handling and mounting.

Another wonderful specimen in the AMNH exhibit is a skull of Camarasaurus, AMNH 467. I’ve collected all four good shots I have into one figure, click through for the full size. As you can see I’ve made it a habit to take a pic of the explanatory signs as well. It saves much writing into tiny notebooks I am so likely to lose!

Then, there is a AMNH 5340, a specimen that was thought to be an adult Procheneosaurus (check this link for a typical reflection-riddled photo!). Later, it became obvious that it is a juvenile hadrosaur, but whether it is a Lambeosaurus or a Corythosaurus is unclear. It is a comparatively small specimen, and for some reason I saw many people totally ignoring the aisle it is in – but it is extremely beautiful! So here come my best pictures of it (admittedly taken this spring, better camera helped a lot). 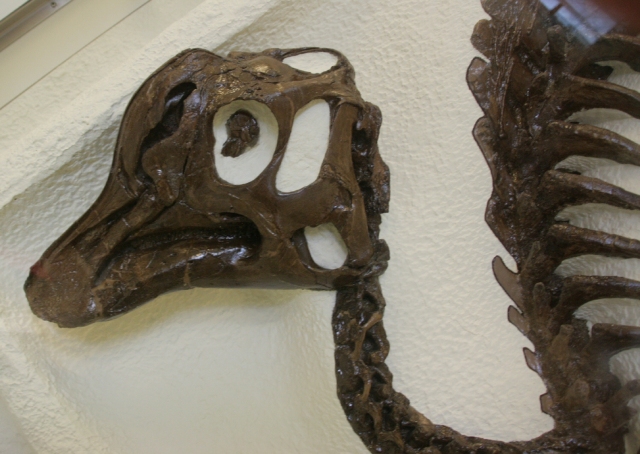 Well, this has gotten long, and the AMNH has so much stuff to show that I better keep some (including the above mentioned Coelophysis, Diatryma and Camptosaurus) back for posts later on. As a final treat, the obligatory Big Bone Room stars: 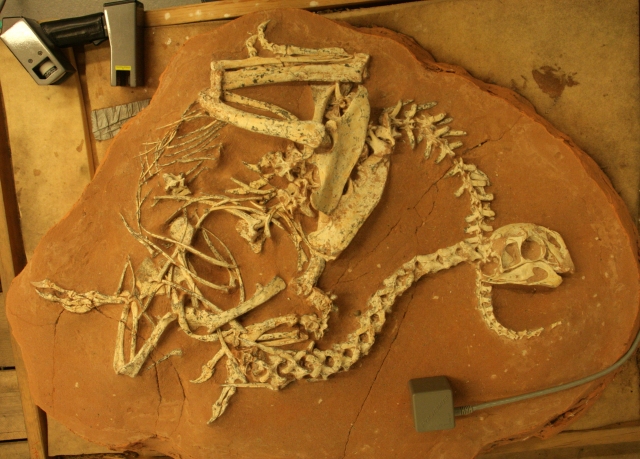 and a detail shot of the skull 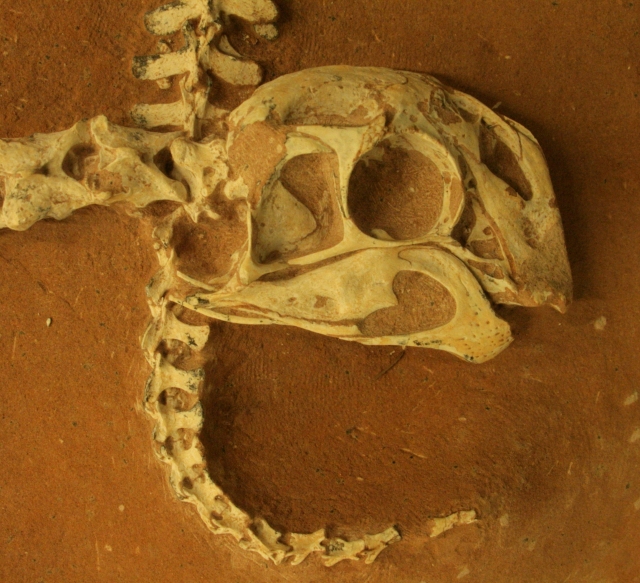 * I have to admit that my search for useful indricothere material recently was successful because of a google picture search! I found an accessible mount (not behind glass, etc.) in an accessible place (i.e., outside Pakistan).