Mounting a skeleton: bones or casts?

Posted on January 22, 2012 by Heinrich Mallison

If a museum plans to exhibit a new dinosaur (or fossil mammal) skeleton, the first question that needs to be answered is whether to mount the real fossils, or casts of them. In some cases, the decision is fairly easy, e.g. if the fossil is physically or chemically too instable to be mounted. In others, however, a number of factors play a role. 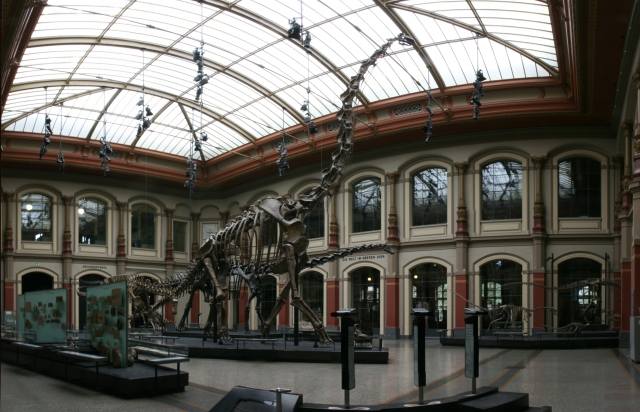 Two casts (Diplodocus, Allosaurus), several real skeletons (Dicraeosaurus,
Elaphrosaurus, Dysalotosaurus) and a chimera (Giraffatitan: most is real
bones, but the sacrum and neck are casts) in the MfN Dinosaur Hall.

There are a number of compelling arguments against mounting real bones, and for mounting casts:

Additionally, if you decide to loan your dinosaur (or other skeleton) to a temporary exhibition at the other end of the world, as the MfN did with its Giraffatitan (then Brachiosaurus) mount in 1984, it is much simpler to use casts – and casts can be replaced! That’s probably the most important point about mounting casts: you can always get new casts, but if you break or loose the real fossil, you just ruined an irreplaceable specimen.

On the other hand, there are good reasons for using real material, too:

Here’s an example of a typical cast mount: 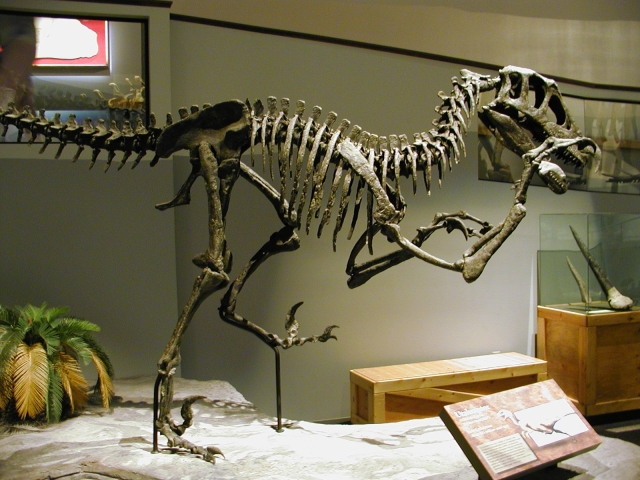 A Utahraptor cast, at the Museum of Ancient Life at Thanksgiving Point.
I showed you this mount before.

It’s a bit harder to notice on the black-like-the-Morrison-Formation colored bones, but the entire thing screams “fake!”, despite being very well done. You just can’t get the natural variation in color just right, and it is an eternal bother to get the breaks and hairline cracks to look natural. On the other hand, there is very little armature visible.

Now here is a real-bone mount: 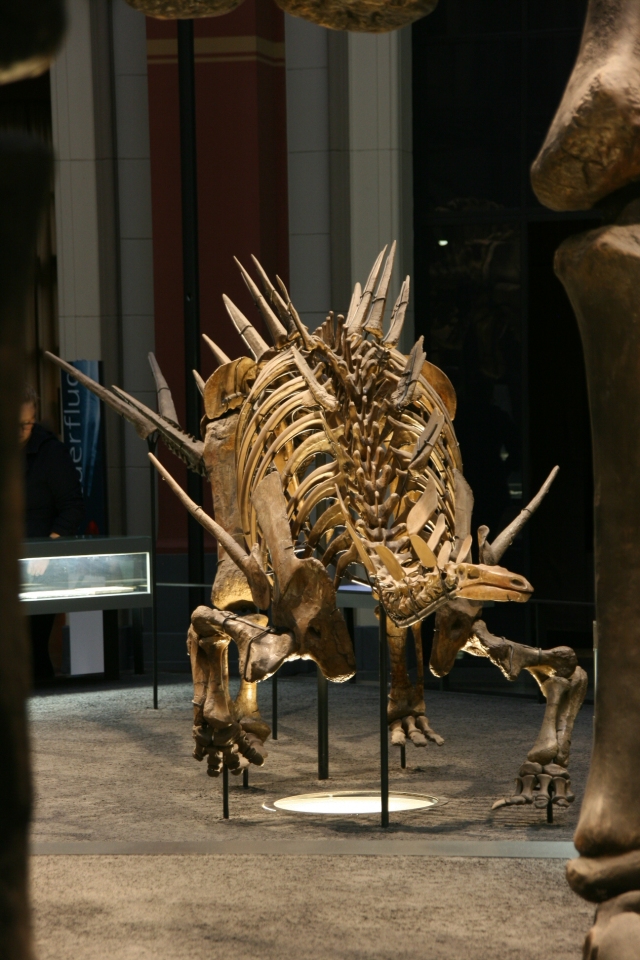 The Real Deal(TM) – Kentrosaurus aethiopicus mount in the
MfN Dinosaur Hall (photographed through the legs of
the Diplodocus cast). Note how the fake skull sticks out like
a sore thumb! (I know, I know, Peter, you will ignore the rest
of this post and just salivate over this image. Real Dinosaur palaeo!)

So there you have it: almost everything that matters to a scientist says you should mount casts, and keep the precious originals in well-tended collections. On the other hand, the issue of communicating our work to the public is a huge, important one. And there is a difference between casts and real bones, a difference in how people react to them, a difference in the awe and wonder they inspire. It’s a bit like Ancient Greece’s temples and a  Las Vegas replica, or like the Forum in Rome and the Caesar’s Palace casino. People will like and enjoy the casts, but they will not admire them, they will not be awed!

So overall, I am slightly in favor of mounting real specimens. Provided, that is, that they are not exposed to unnecessary risks, and that they are sturdy enough to take no perceptible damage. That means keeping them separated from visitors enough to make sure no bones are stolen, mounting them on more rather then less steel than necessary, air conditioning the room if necessary, and having sufficient personnel present all the time. Furthermore, I want the material available for study. Either close one day per week, or allow scientists to work during opening hours – and if needs be, close a room to the public while a researcher is in there! Places like the AMNH, where fossils are protected by glass walls that usually can’t be taken off for such unimportant research as yours (making the wording up, but that’s the essence of the message you’ll normally get) do science a disservice by it – while at the same time doing it a service by allowing the public to study the fossils up close, which does wonders for teaching!

Luckily, there are a number of things a museum can do to minimize the problems resulting from showing real bones. Above, I used the ugly word “chimera” for the MfN Giraffatitan. The reason is simple: it is composed not only of real bones, supplemented with plaster models where there was no real bone available (which I would count as “real bones mount”). Rather, the sacrum and neck are models! The reason is quite simple – but I’ll let the guy responsible for it speak for himself (Janensch 1950, p. 97):

(The entire presacral vertebral column, the vertebrae of which are all preserved, albeit mainly significantly incomplete, was modeled in plaster along with the cervical ribs. Mounting it from original pieces would, given the enormous weight and the extreme fragility of the most complexly built vertebrae, have posed nearly insurmountable difficulties, but had in any case required such an extensive armature that the overall view would have been significantly compromised.)

Ah, yep, that’s a reason right there! And the good thing is that all the cervicals rest in the Bone Cellar, where nerds like me can get all close and cozy with them 😀

Now, you can obviously choose a way of mounting that is as unobtrusive (thank you, spell checker!) as possible, but still keeps the bones secure, as Dave Hone pointed out. And, as I pointed out in comments there, this is not an idea that only gained a foothold recently: 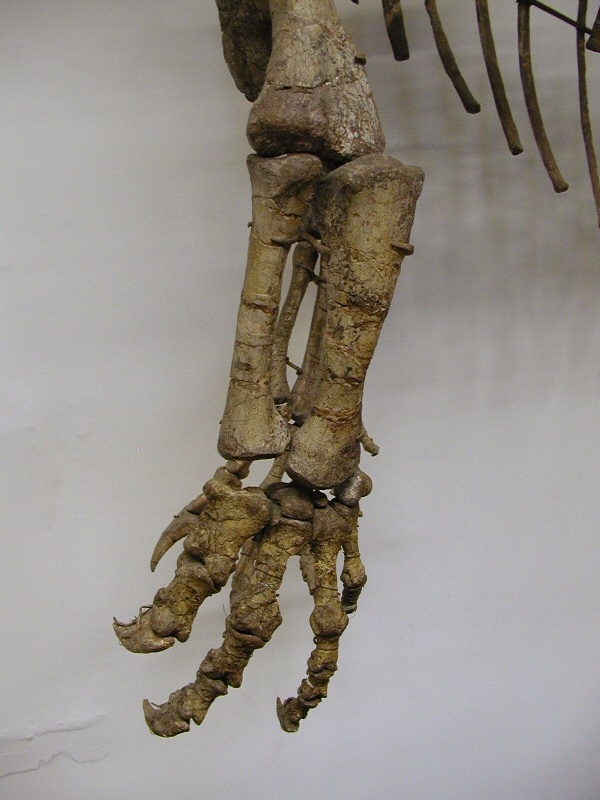 Left forelimb of “GPIT 2” you-know-who. Note how little the armature
and the wires fixing the bones in place distract from the fossil!

Here’s an example where the bones have been taken out for study (by me, who else?): 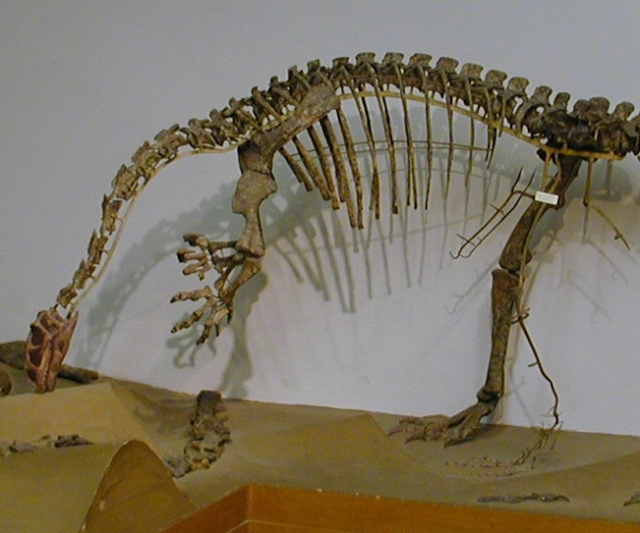 GPIT/RE/7288. Non-regulars will now be forced to read my fuckin‘ blog 😉

Pubis, ischia, left ilium, left femur, left tibia, left metatarsals, left pedal phalanges removed. All it took to get them back in later was 20 cm of wire and pliers. Yay! for Friedrich von Huene and the preparator(s) who mounted this skeleton! Aside from being anatomically almost entirely correct, they did an awesome job of making the armature NOT show too much!

Another option is not mounting the bones, but still showing them. Here’s two examples:

Panorama image of HQ 1, a composite Diplodocus in the Sauriermuseum Aathal.

A Chinese Lystrosaurus in the Institute for Geosciences of Tübingen University (at least, that was the name it had back then).

Yep, lay those bones out on the ground! If you can, and if it is not too confusing, lay them out in the position you found them in. In either case, btw, the display is (Aathal) / was (Tübingen) accompanied by a mounted cast.

Thus, whatever you do: show people the real stuff! It really makes a diff, and all the inconveniences considered, what is our prime goal? Yep, teachin’ folks! And that’s best achieved if the real stuff is out there!

31 Responses to Mounting a skeleton: bones or casts?