Posted on February 11, 2012 by Heinrich Mallison

We’ve had a look at Urzeit Park as a whole, and at all the Jurassic models, now is the time to address the next period – or rather, periods. I’ll lump all the Palaeozoic, because the total number of models from the Cambrian, Ordivician, Silurian, Devonian, Carboniferous (Mississippian + Pennsylvanian for you other-side-of-the-big-pond-ers) and Permian is so small. Unfair, hu? We have 6 or 7 distinct periods, depending on whether you learned your regional geology east or west of the Atlantic, spanning almost 300 million years, with animal and plant life going from Ediacaran levels (squishy and weird, mostly) all the way to terrestrial ecosystems with large herbivorous and ferocious predatory vertebrates – oh, and don’t forget all the cool huge insects! And they all together only get one lousy blog post with a handful of photos!

Well, partly my fault: I did not take pictures of all the models the Urzeit Park has. I’ll confess up front that the following critters didn’t get Canonized: Meganeura, a dragonfly so large it really earned the name “dragon”, early tetrapod Ichthyostega and boomerang-headed Diplocaulus. The rest of the blame must be laid at the feet of the Urzeit Park makers: there aren’t any pre-Devonian models at all!

This leaves us with only four animals and five photos – you’ll understand the reason for the extra photo in a second.

Let’s start with the typical must-have of Devonian critters: Dunkleosteus! 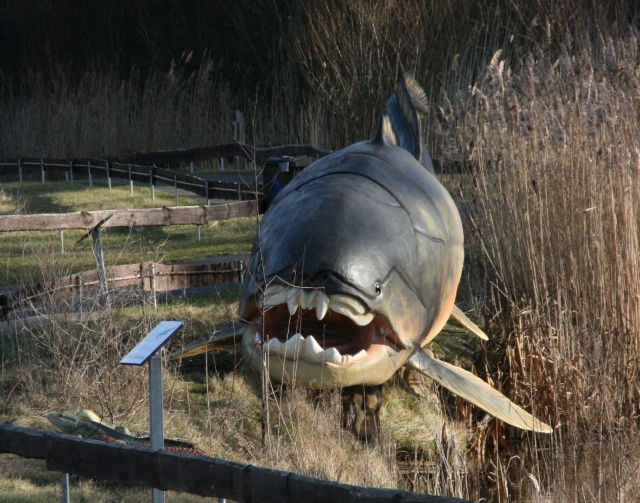 The poor fish is stranded in practically all places that exhibit a model outdoors! To spice this post up a bit with real fossils, here’s a lateral view of the skull on exhibit at the AMNH, in the “Vertebrate Origins” hall.

and the AMNH’s model, which – hanging under the ceiling – looks much less ridiculous.

The next animal is not a vertebrate, but at least it hard hard tissues – i.e., it fossilized well!

This is supposed to be a generic ammonite, and reminds me very much of a plastic toy model, 3 inches across, that I once gave a palaeontologist friend for her birthday. She had a whole collection, which were hung above her dining table, bathtub and bed – yes, we are a weird bunch! But this model – well, check out another picture of it: 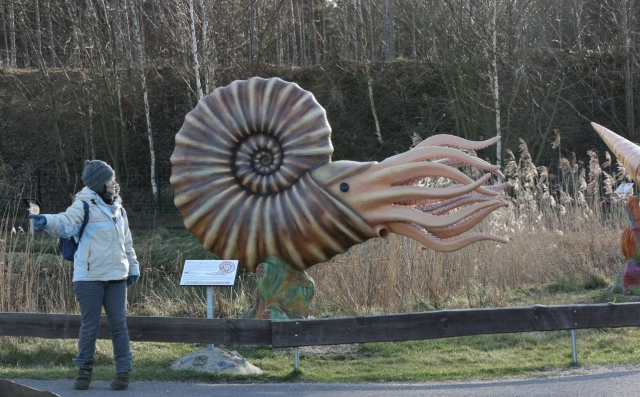 It is often fun to see laypeople’s startled and disbelieving expression when I walk them though the MfN’s cellar, where an ammonite with a diameter of slightly over 1m (guestimate) is stored in a corner of the hallway. “That large????” is the typical reaction, while some simply refuse to believe that this seemingly featureless stone is anything but a fragment of concrete left over from the WWII bombings. But yes, some ammonites were simply huge.

However, there is a fly in that soup: check out the shape of the shell of the model – it looks suspiciously like a mesozoic ammonitid, and I’ve never heard of giant palaeozoic ammonites either. OOPS!

By the way, on the very right of the last picture you can see a tiny piece of an animal I also did not photograph individually, so this tiny scrap will have to do: a belemnite. That one did live in the palaeozoic at that size.

And now, finally, for terrestrial vertebrates. No dinosaurs, because they only evolved in the Triassic, but at least limbed, walking vertebrates! 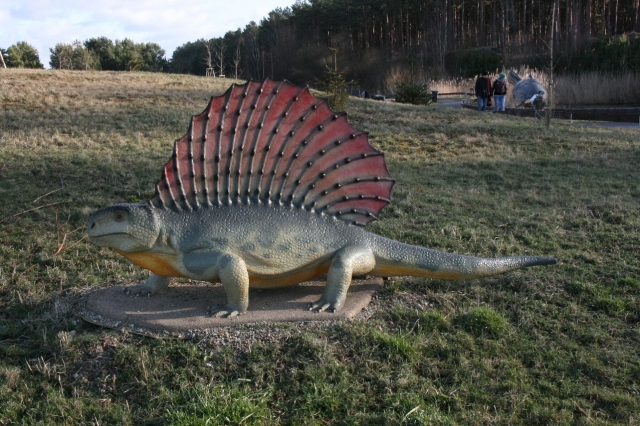 Edaphosaurus – it is nice to see a fin-backed animal that is not Dimetrodon for once. Both are eupelycosaurs, and rather closely related when you compare them to such derived synapsids as dicynodonts, gorgonospians and therocephalians (all half-way on the path to “proper” mammals, so to speak), not to mention mammals themselves. However, E. was apparently herbivorous, whereas D. was a carnivore.

Oh, talk about Dimetrodon being everywhere…… here you go:

Now, what’s my take on the accuracy of the models? I have to admit that I barely know all these modeled animals – much know them better than most laypeople, but I am no expert on any of the them at all. Overall, however, I think they are pretty cool!