Posted on February 18, 2012 by Heinrich Mallison

Sharks are many people’s nightmares, especially during nighttime swims under the influence. JAWS is on everyone’s mind. The steel jaws suddenly coming up behind and biting half of you off….

In fact, sharks are quite cautious animals. And shark attacks on humans are rare, even if global warming and tourism bring new migration patterns and thus doubled lethal attacks last year. When a shark approaches an unfamiliar object it will usually circle it, the swim by and rub it a bit. There’s a good reason for this: a shark’s skin has gazillions of little denticles, which is why shark skin makes pretty good sand paper. What that does to an edible animal in the water is pretty obvious – it rips open the skin, and starts a bleed. And blood in the water now tells the shark that it is dealing with an edible object, as opposed to a tree trunk or so. Some animals may be too big and sturdy to bleed this easily, but then, an animal that won’t have a slight bleeding wound from such a test is likely too big and tough for the shark to tackle.

The other strategy sharks use is the surprise attack from out of nowhere. Rush at it, bite off a piece, get lost quickly. This usually follows the cautious approach just described, but also occurs without a prior test – if the shark is sure of its target’s quality. Looks like a seal, moves forward – is a seal! ATTACK! Which is why surfers rowing on their surf boards are so threatened: they look like something the shark knowns, does not need to test for edibility or danger – WHAM there goes your left leg! This kind of attack can lead to rather spectacular films, when the shark comes out of the water with its entire body (youtube link).

There is one situation, though, called a feeding frenzy, in which sharks forgo all caution. In short, a feeding frenzy is a situation where a large supply of food causes the predators to snap at anything, moving or not, and just gorge themselves. This can include sharks biting sharks, so that a hunter can quickly become fodder, too! “How Stuff works” has a pretty article on this here.

But feeding frenzies are not limited to sharks. Recently, in the Berlin Zoo, I was able not only to watch, but also to photography one. It involved at least four different species of predators in large numbers, and numerous individuals of other species. As usual, a sudden surplus of food caused the frenzy, food doled out by the keeper. Given the number of individuals involved feeding each one individually would have been impossible, so the keeper threw large amounts of food out in one go, and all predators tried to get a piece of the cake. 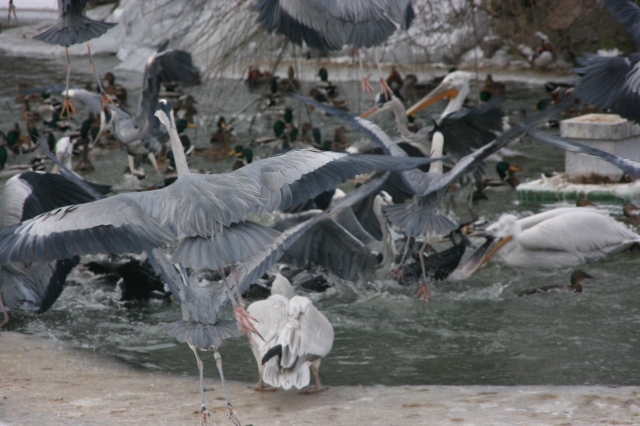 Especially interesting to see were the differing methods of getting part of the feast used by the various species. The pelicans (no idea which species exactly, sorry) tried to form a ring around the likely location of the fodder, much as they try to team up and herd fish when they do not drop in from overhead, but are alive and swimming. The grey herons stood around, waited for the keeper to throw the fish, then went in for an aerial attack. The cormorants (Great Cormorant, I guess) did their best to catch the fish right when they came down, and fought hard among each other, including diving and snapping fish out of the pelicans’ open beaks!

What’s decidedly different between this theropod feeding frenzy and one by sharks is that the birds go in with more deliberation – this is not a blind rush but rather a smart grab for as much food as possible. As a result, once all food is (or seems to be) snapped up, quiet immediately ensues: