Mammal Monday 17 coming to you out of John’s Freezer

Posted on April 2, 2012 by Heinrich Mallison

What’s in John’s Freezer? Well, lately John ‘The Hutch’ Hutchinson has been sharing some of the cool (pun intended) stuff he keeps in his various refrigerators. That’s a blog really worth reading, so wtf are you still doing here???

That said, starting today a research assistant from Berlin (hi, Sebastian!) and I get not an electronic, but very real and physical look at some of the stuff John has frosted for later research. We’re doing part of that research, on specimens John previously CT-scanned. He has a bunch of posts up: 1, 2, 3, 4. What we are doing is a detailed dissection of giraffe legs. Not something I’d trust myself to do well, given my minuscule experience dissecting anything larger than a tapeworm, but we’re in the best of hands here. Expect a lot of slightly gory pictures in the next few posts, and (hopefully soon) a lot of cool musculoskeletal modeling stuff of giraffes.

John and the right front leg of the giraffe. It kept quite well despite having been thawed before, so there was (so far) little smell. John is really fast with a scalpel, so getting the skin off the shoulder area took only a minute or so.

The master at work. 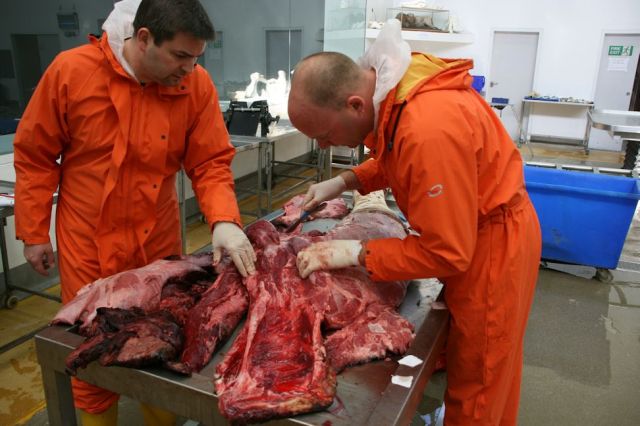 John demonstrating the finer details of triceps attachment, me looking on stupidly.

RVC is quite the facility you want to be at for this kind of work, and I’m very grateful to the people running the lab that we’re allowed to use it. Everybody is terribly nice and helpful, especially John and Penelope Hudson, who has a ton of experience dissecting giraffes and helped out identifying the various shoulder/neck muscles. It is kinda hard to distinguish them if you need to guess where they come from – luckily, the vets who cut the giraffe apart knew what they were doing and thus we have a lot of muscles fairly completely that normally get hacked apart. Mammals are so much more complicated than archosaurs….. *sigh*

I'm a dinosaur biomech guy
View all posts by Heinrich Mallison →
This entry was posted in anatomy, Giraffa, Mammalia. Bookmark the permalink.