I am not going to stoop to the level of making stupid jokes about “going down a level” when I walked from the raised walkway in the NHM Dinosaur Hall to the rest of the exhibit. Never! Not me! Nah…… although it is tempting. I’ll rant today, the rave (and there is much to rave about) will come next time.

Upstairs there are a lot of dinosaur skeletons to see, mounted. Downstairs, after the pretty nice Tyrannosaurus “nocturnalis” intermezzo, begins the educational part. And the atrocities. As well as the gagging noises I made whenever Sebastian pointed at something. (OK; there were a few “Ah”s and “Oh”s, too.) Admittedly, the exhibition looks old enough to drive, and dinosaur palaeontology has come quite far during the last two decades, but much is, well: plain wrong – when what we now know about it today with certainty was not exactly a heretical idea in the 1970s and 80s.

The biggest faux-pas, the one that had me reeling – how can they NOT fix this one??? How can they still claim this without considering suicide every time they walk by one of the signs? The NHM exhibition still claims that birds are not dinosaurs!

Let this one sink in, and let me show you the proof (photo from exhibit): The NHM is officially in the BANDit camp!* Ok, they do not explicitly subscribe to the ghost lineage nonsense of certain ornithologists, but how many ways can you read this statement:

“Dinosaurs lived on land
but could not fly”

Say again? I guess I should be grateful that they do not count plesiosaurs among the Dinosauria. *snort*

* BAND = Birds Are Not Dinosaurs

BAND is implicitly repeated in another line:

Now, they could be forgiven if the idea that birds are dinosaurs wasn’t around when the exhibit was designed. Let’s assume this is true – then the design was finalized in the early 70s at the latest. Because the below snippet is from 1973:

And that was not some nutcase writing in some obscure lab journal, that was John H. Ostrom‘s paper “The Ancestry of Birds” in volume 242 of Nature! There were other papers, by Ostrom, by Bakker, the idea was most definitively in the air in the mid-70s. Thats (quick mental maths: 2010-1975 = 35) nearly 4 decades ago! Don’t tell me that you can’t fix two darn signs in that time!

Another excuse would be that the exhibition is really huge, with tens of thousands of signs. One or two may simply go un-noticed, un-questioned, un-updated.But now – there is preciously little text, which gives the NHM’s Dinosaur Hall a very modern feel (and don’t I hate this “bowing to the least interested visitor” scheme!). See next pic for an example for how much info they deemed necessary per dino. In fact, off the top of my head I can’t really recall even ten signs overall that made general statements on dinosaurs. And I distinctly recall a sort of quiz thing for visitors that reinforced the dinos-are-extinct meme!

As Paul Barrett pointed out in a comment on my previous, overall not too negative post on the NHM’s Dinosaur Hall’s first half, much of the design compromises were owed to the building’s protection status, overall space available, and to the huge number of visitors the exhibit gets. Obviously, the sheer throng of people pushing through makes it hard to add a lot of text, because once you get people lingering in one place, you get a congestion, and if there is simply too little room to allow for that – well, make sure people push through at a steady space and do NOT linger.

I could now derail into another rant on that, pointing out that it might have been a better idea to show much less, but with more in-depth information. But that’s a matter of taste and how you judge your visitors’ interests. Let me just say that there were quite a few wonderful exhibit specimens that were woefully under-explained!

For example, some of the artwork is simply splendid, even if the scaly-reptily look of the animals is a bit anachronistic. However, all dinosaurs are erect-limbed, they nest properly (kinda – science has moved a bit on that as well), and some are nicely colorful. Oh, and they do not all linger in swamps! Nice models of Orodromeus and Maiasaura nests (nah, I won’t get into the issue of assigning nests to bone species in this case), a pretty scary Tyrannosaurus head model, a (tolerably too linear and simplistic) display explaining the route from a find to a drawing or model of a dinosaurs, some very nice specimens (more on them in a later post), life-sized muscle models of various dinosaur hind limbs…. much there to like.

And then they do it again! Another blunder, and this one is clearly not a matter of science changing. Check out this picture: 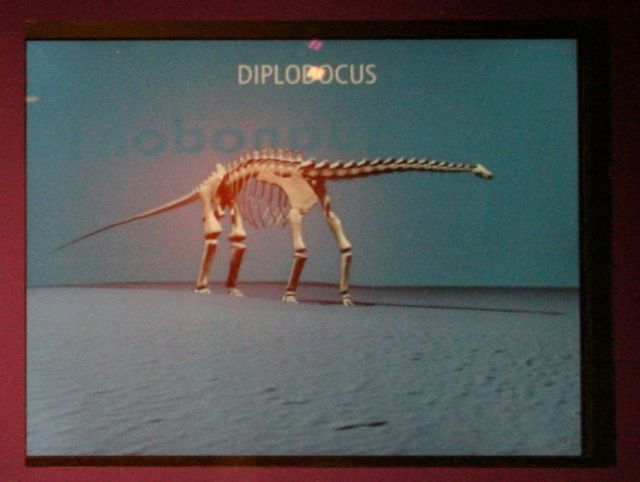 That’s a screw-up that really isn’t hard to fix, and it is really, truly, deeply embarrassing. Please, please, please dear NHM staff: next time you exchange some signs and stuff, please fix this! Give the poor animal proper elbows! Please?

And while you’re at it, use the enormous amount of free space on the signs I mentioned before, and change the text. You don’t need to do much, just say

“Dinosaurs lived on land,
and one dinosaur group, the birds,  learned to fly”

There, wasn’t so hard, was it? You do not even have to change the numbers 😉 add a handful of feathers and I’ll be happy.

I'm a dinosaur biomech guy
View all posts by Heinrich Mallison →
This entry was posted in NHM London. Bookmark the permalink.