The Ozeaneum in Stralsund part 3

After two posts of architecture, whale skeletons, plastic models and stuffed animals, it’s finally time for some live animals! The Ozeaneum has plenty of aquaria, but I only have a handful of OK pictures, mainly because I was pushing a pram around the place.

Let’s start with a ray – I forgot to take a picture of the labels, and am most certainly too lazy to check wikipedia for the species.

The ray swims happily in a glass-walled tank with an open top and low enough that kids can look in from the top – which is what it is there fore. It’s part of the The Children’s Sea exhibit. It also features the ten largest Humboldt penguins in the world: 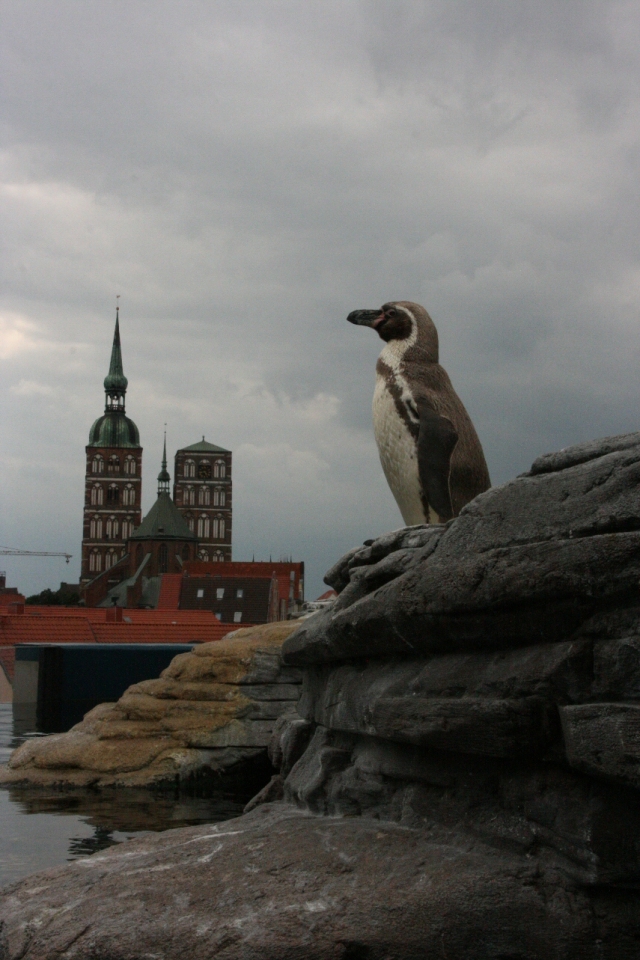 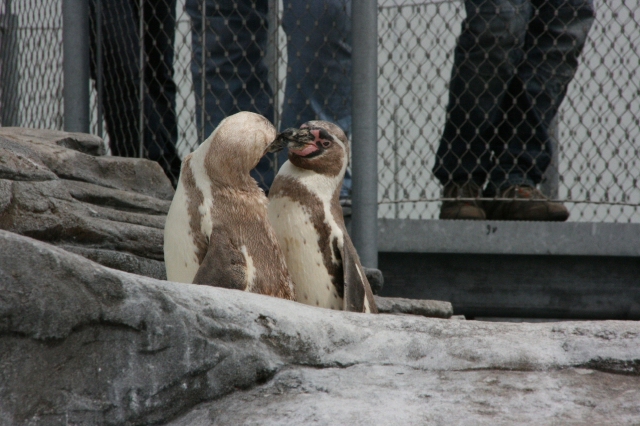 The enclosure has several huge windows into the water, which allow seeing the penguins swim – but not only that! 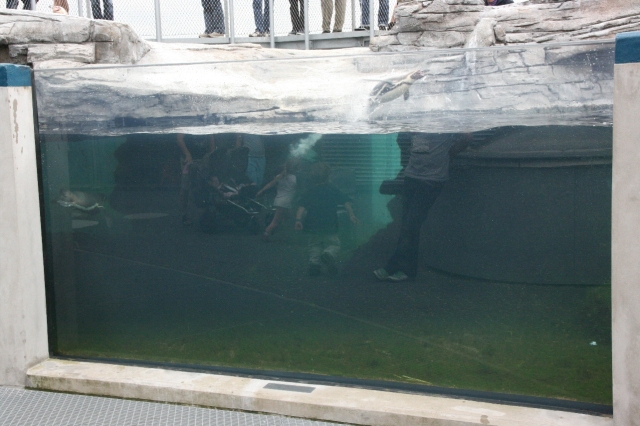 Here, you can see the biggest window, with mirror images of my kids running off to play in the sea grass meadow model (all kids love it and play hide&seek), but because the water is deep enough for the penguins to get a good speed on and then surface, you can also see a leaping penguin. Enlargement of relevant area: 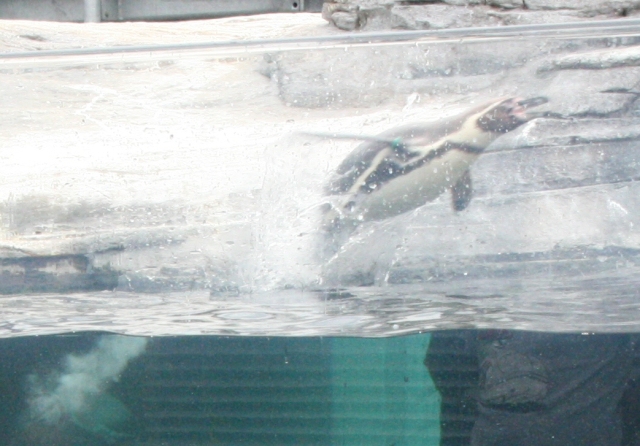 Dropping back into the water the birds trail a lot of bubbles, which nicely show their wing strokes and body motions.

but now for some serious fish aquaria. Here’s a view of the Bodden one – a Bodden is a shallow sea not fully open to the main sea, thus a lagoon. Often, the water is brackish. 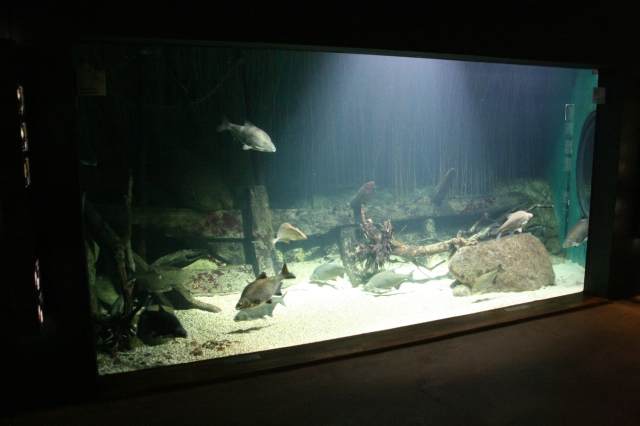 The setup is typical for the Ozeaneum aquaria: a dark room with large tanks in the walls, from the ground up, so even small children can get a good look. There also are smaller tanks, about a cubic meter or less, placed free-standing, and also in the walls between the big ones. The large tanks are intended to show specific habitats, like harbours, Scottish coast firth caves, and so on. All are nicely decorated, well lit, and have plenty of fish and invertebrates in them. The smaller tanks have a much lower diversity of animals in them, usually smaller ones that would be very hard to watch closely in the big tanks. My children were impressed with the pipefish ones, where they could easily see how well pipefish are camouflaged.

Looks a bit like those images used to test for colour blindness, but in fact this one is for playing Spot-the-Turbots (Scophthalmus maximus). And the plural was not a mistake!

This turbot didn’t get the news about being a pleuronectiform yet, and kept swimming around all over the tank. 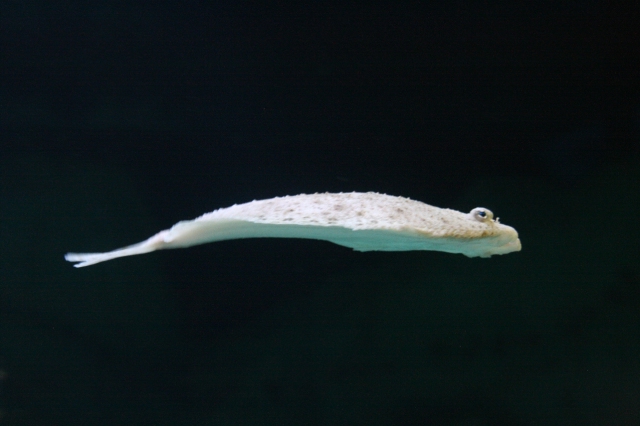 Other aquaria: my wife pointing out Moon jellyfish (Aurelia aurita) to the kids: 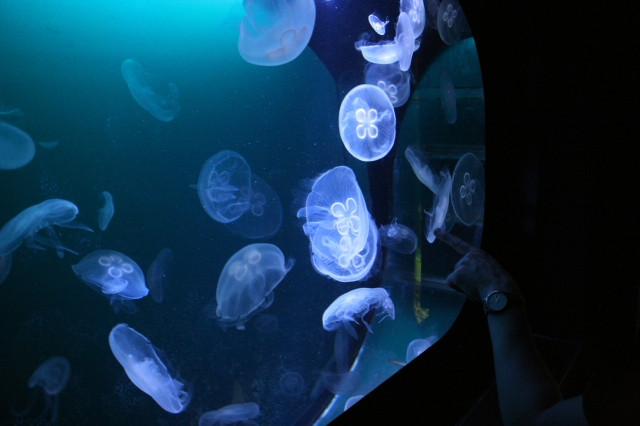 the Wattenmeer (intertidal zone) aquarium, which has a very weird shape that allows seeing the fish in it much better,

The aquarium window is 30 cm thick and weighs 22 tonnes – nothing compared to some large aquaria in e.g., Japan, but pretty impressive for a private (foundation)-funded museum in a small town in dying East Germany. Well, the touristy and thus surviving coastal part of it, that is.

Amazingly, people were very well behaved in the aquaria, I didn’t see a single person using a flash for the camera!

The last handful of photos will have to wait for a the next and final post in this series.

3 Responses to The Ozeaneum in Stralsund part 3