Posted on December 5, 2012 by Heinrich Mallison

Until 1973(!) the Jurassic of Germany was officially structured using Friedrich August von Quenstedt‘s scheme: Lias, Dogger, Malm. A reminiscence of the Trias of Friedrich August von Alberti. However, each section had to be subdivided, for which purpose Quenstedt used Greek letters (α, β, γ, δ, ε, ζ – if you wanna work on German ammonites or ichtyosaurs you should at least get to ζ in the Greek alphabet!).

But again: not enough! Quenstedt needed to divide the layers further, and used Roman numerals. Thus, signs in exhibitions will say stuff like “Arietes sp. Lias α 3″. And when you talk to private collectors or local geologists, that’s all you need. Quenstedt’s divisions were litho– and biostratigraphic, and in 1973 replaced by the international bio- and chronostratigraphy – but I’ll be damned if I use this new and less-well-fitting system when talking about the Swabian Jurassic.

So, the Lias is the Lower Jurassic of SW Germany (yes, there is a N German one, too, but that’s not my subject here). The Lias forms much of the cuestas making up most of the landscape between Black Forest and Swabian Jura, whereas the Dogger and especially the Malm form the steep rise and plateau of the Swabian Jura. And the Lias is so choke full of fossils that this post will be only on the Lias α, and of that only Lias α 3 – the rest of the α is rather soft and fossils are much harder to come by.

Here’s what makes the α 3 so famous: 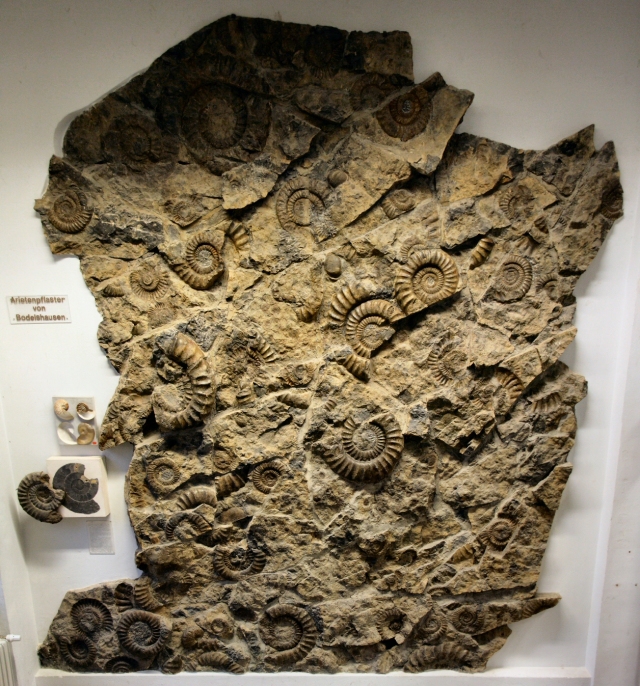 Arietes-pavement in the Collection and Museum of the Geosciences Department of Tübingen University. Arietes is a genus of ammonites, and the Lias α 3 is a very solid and wide-reaching limestone called Arieten-Kalk that in places is so choke-full of Arietes and close relatives (with some nautiloids thrown in for pleasure) that they erode out in stream beds are so-called pavements. Here’s another one, on exhibit at the Staatliches Museum für Naturkunde Stuttgart (SMNS): 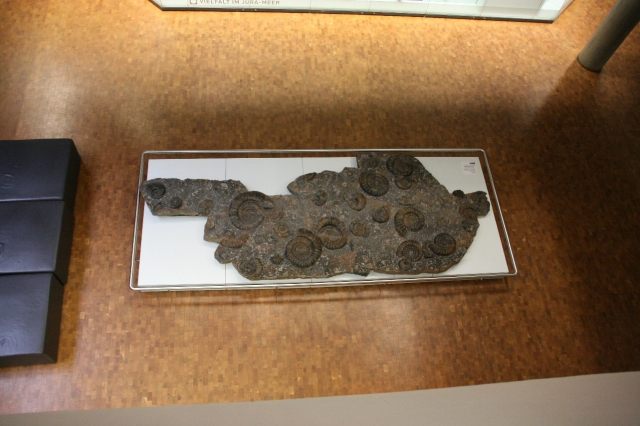 In the Tübingen one you can spot an extant Nautilus shell put up for comparison, and in the Stuttgart photo – taken from the gallery a story above – you can see the three seats on the left which each are easily wide enough for two adults. Gives a sense of how huge these ammonites are. Locals jokingly call them cart wheels or waggonwheels.

A closer view of the SMNS pavement:

The difference between the ammonites (with big ribs) and nautiloids (smooth, but the separate chambers are easily visible) is pretty obvious here – but both groups are represented by good-sized specimens!

The Arieten-Kalk is very tough but in many places forms a layer with a handy thickness of between 50 cm and 1 m, so that it is easily quarried and transported as blocks. These are used to shore up road embankments, form dry stone walls (on playgrounds or in parks, for example), and many other purposes where a tough, slow-weathering and optically pleasing rock is wanted. Some road construction offices in Swabian towns kept heaps of blocks in places that were accessible – fossil hunting was always declared illegal on the dumps but every Sunday you’d hear the sledge hammers ring…… Many collectors only go for the largest and best-preserved specimens. That’s stupid, because the Arieten-Kalk contains a shedload of small taxa, as well as small individuals of the huge species. And often these smaller ammonites are much better preserved. Here’s one from my collection: 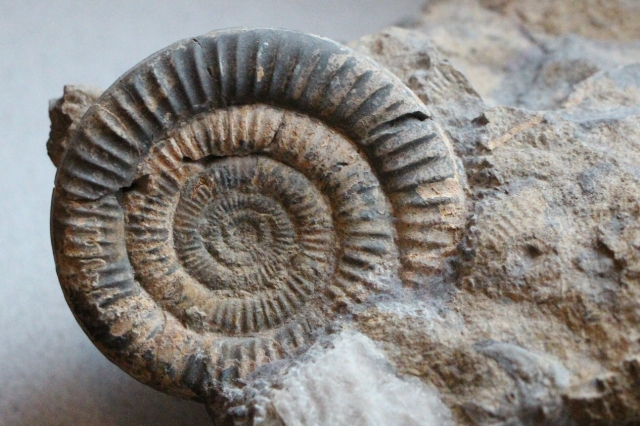 Diameter roughly 7 cm, and isn’t it a beauty? I never bothered to determine the genus and species – arrogance of a vertebrate palaeontologist? Anyway, you can see it has cracks running through it. The way I found it and the reason for the cracks is a typical example of the just-mentioned high-grading collectors. I accidentally happened to pass by one of those heaps of building blocks of Arieten-Kalk in a small town near Balingen, just driving through, and as I felt the call of nature I stopped and got out of the car, and happened to accidentally look at these rocks…. what? No! I didn’t go to that place on purpose to illegally collect fossils! I’d never do that!
Anyways, I happened to note that someone had removed a very large ammonite from a big block probably only a day or two before. There was dust from breaking the block still on the remaining pieces. Such freshly broken blocks offer a good chance to find small stuff, so I started turning the smaller pieces over. I found the fossil shown above, but it was quite broken. From the position the rock lay in I concluded that it had spalled off the back of the big block when someone used a sledgehammer on the front. That meant that the debris including the missing pieces of the specimen had fallen into a crack between two big blocks under the one that had held the specimen. Grateful that this was Swabia, not the US West, and that I would therefore not encounter any rattlers, I lay down on the rocks and managed to reach the bottom of the crack with my fingertips. I spent a good half hour bringing up handfuls of rock dust and little pieces, sorting them carefully – and I managed to repair my specimen! The ammonites in the Arieten-Kalk are preserved as steinkerns (internal casts) with the external morphology imprinted on them during sediment compaction. Thus, they often separate easily from the rock, sometimes coming completely away with only one tap of the hammer. That’s what happened here, and I did barely any prep work besides glueing the pieces back in!

I found more bits and pieces that day, too. Some of the tiny ammonites had damages external surfaces, but look what you can do with them:

I used a rock saw to cut the rock, trying hard to hit the median plane of the ammonite, then ground and polished the surface. If you look real hard you can not only make out all the internal chambers, infilled with calcite crystals, but also the living chamber, which goes around roughly 1.3 times. Easier to see in this shot from a different angle, which also shows that I managed to spectacularly miss the median plane with the second, smaller ammonite on the same rock.

The Arieten-Kalk laterally turns into the Grpyhaeen-Sandstein, and the oysters (Gryphaea) for which the latter is named can also be found, along with a lot of other shells, in the Arieten-Kalk. I have a nice hand sample the sides of which I cut and polished, too:

In some places, the gryphaeas are actually petrogenetic, they form the rock with other stuff just filling the nooks and crannies! They have a very distinct shape, with one tick and strongly rounded shell, and a small “lid”-shaped second shell. In very rare cases you can find them still articulated.

The Arieten-Kalk’s sturdiness contrasts with the neighbouring rocks, and thus you can easily spot it in the Swabian landscape. Whenever you’re walking on Triassic rocks and suddenly the road tilts up like crazy and starts veering left and right in almost-switchbacks, go to the top of the incline and you’ve found the α 3! South of Tübingen, for example, a large plateau extends towards Reutlingen on which practically any excavation for a new building results in the Arietenkalk being dug up. I witnessed several very odd sort-of auctions at such construction sites, where the driver of the excavator would shovel out a piece of rock with a waggonwheel ammonite on it, look a the assembled middle age to elderly Swabian gentlemen standing around the hole, get a nod from one of them and lay the ammonite at the guy’s feet. Afterwards, a case of beer or two (in the 80’s) or a wad of cash (post-2000) would change hands. It used to be that children and students could get some stuff, but nowadays, with much less construction hitting fresh Arietenkalk, that’s a thing of the past.  You gotta remember that Swabia is filthy rich, and that any pot-belllied, mustached and balding guy you see walking down the road in ill-fitting jeans and a chequered shirt probably earns three to four times the national average income – or more! (It is kinda funny how these collectors tend to look very similar to each other.) A lot of these people take an interest in local fossils, and have the cash to out-bid each other. Prices are up, and the poorer collectors are out. Pity!

Well, the Arieten may be out of reach for many amateur fossil hunters, but the Lower Jurassic of Swabia holds a lot more stuff. Next post we will move up a bit, in fact all the way to the Lias δ and ε. And not even ten posts will be enough to show you even half of the amazing fossils a small handful of museums has on show from the latter!