Posted on February 4, 2013 by Heinrich Mallison

A sleepy Aliurus fulgens at the Tierpark Berlin. Posted before, but photographed in summer. To some animals, with sufficient fur, it just doesn’t matter if it cold or not, or if there is snow on the ground or not.

OK, Red pandas live in the temperate forests of the Himalayas (say wikipedia), so it is no surprise that they do not mind the Central European climate’s winters. But what about the next animals: 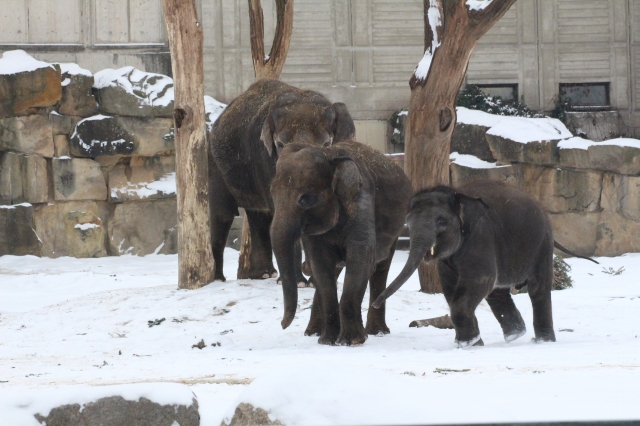 OK, elephants shouldn’t mind the cold that much, and although they are today restricted to very warm habitats other species (and subspecies) in the past (and that includes a very recent past) have lived in areas with high enough mountains to have snow, or outright in temperate climates. Some even lived in areas with permanent snow cover (think mammoth!). Next up:

Grey kangaroos! I have no idea if this is Macropus fuliginosus or Macropus giganteus. In nay case, kangaroos are not the animals one normally associates with a white-blanketed landscape. But even the mild climate of southern Australia knows occasional snowfalls, and as all animals kangaroos are not only adapted to the regular weather in their normal habitat, but also to the rare but regular exceptions. Thus, do not be surprised if animals cope with weather you do not associate with them. Same goes, btw, for behaviour!

For the finale of this post, here’s a Barbary Macaques (Macaca sylvanus) mom with her baby, doing the smart thing in the cold: fluffing up and sitting as still as possible. And keeping the young close and warm. 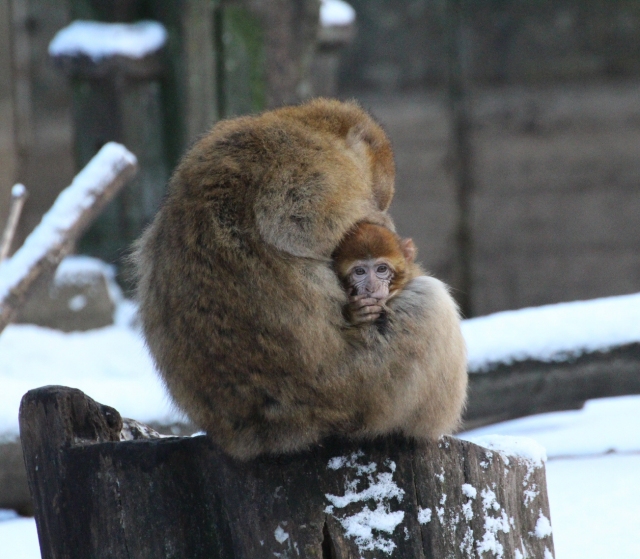 Compare to the way they normally act in nice weather…..