Posted on April 4, 2013 by Heinrich Mallison

Recently, there has been lot of debate about theropod feathers. Aside from another BANDit* paper and its evisceration, there was the “science ruined dinosaurs” debate, with some people claiming that feathered theropods are simply not scary and cool. Hilarity ensued among those who know a tiny bit about birds and how “cuddly” and “nice” they are – need I mention Zombie Tits again? There were quite a few blog posts on this worth reading; I’ll just link to this. The recent idiotic decision to keep dinosaurs scaly and leathery in the next Jurassic Park torture is just another anecdote in this, despite the huge amount of press it has seen (I picked two links at random, so please don’t be angry if your blog post is not cited here).

But, you know what? Even those birds that really  “don’t lurk”, “don’t menace” are cool. And scary – or would you consider gang rape with an explosively uncoiling penis longer than the animal’s body “nice”? It is not cool let me tell you that. But it is a reproductive strategy that has worked well for ducks. By the way, pigeons aren’t very much into discreet 1:1 sex either.

So, “cool” – I think the elaborate plumage with all its varied functions, including keeping the bird warm, dry, and in the air, is really cool. And there are so many different examples of how this can be achieved that I have a hard time choosing which is my pick for today. I’ll simply go with an especially colourful and beautiful duck for today.

Yeah, famously colourful. But people tend to forget the females. In practically all ducks they are much less colourful than the males – in fact, as a student in the course “Exercises in diagnosing vertebrates” there was nothing I feared as much as female ducks! OK, admittedly, KGVs (kleine grüne Viecher = small green beasts) and KBVs (kleine braune Viecher = small brown beasts; both referring to songbirds) were pretty bad, too, but at least you’d be stumped with a choice of three species at most. Female ducks? No chance in hell to guess enough right answers to pass the test. They all are brown and look exactly the same, at least most of the species common in Central Europe. Luckily, the Eider Duck and a bunch of others stick out, as does the Mandarin Duck. And to me the Mandarin Duck female is one of the most beautiful ducks in its elegance. 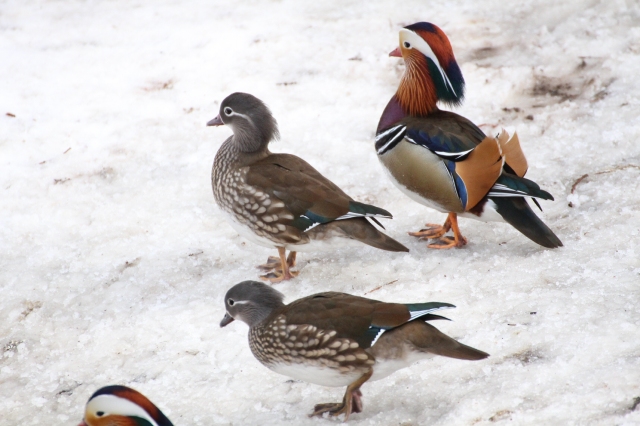 So, the big question remains: what’s cooler? A lizardy Velociraptor, or one with a maroon head and neck, blue stripes on the wings, and white eyeliner? One that puffs and huffs with the best of them, spreading out the feathers and revealing colourful blobs where seconds before you only saw grey and brown camouflage?

Looking at birds today, my choice is clear: I’ll go with the feathered one!

I'm a dinosaur biomech guy
View all posts by Heinrich Mallison →
This entry was posted in Aves, Dinosauria, Maniraptora, Theropoda. Bookmark the permalink.

4 Responses to Theropod Thursday 45: a beauty