From Africa to Asia – yes I am doing this tour of the bird in the Zoo Berlin’ new bird house alphabetically. Asia here should be read as SE-Asia, with most species shown below occurring on the islands between India and Australia. Some species come from India or mainland SE-Asia, too, but nothing comes from the Near East or Middle East or northern mainland Asia (Mongolia,  Korea, Russia (Siberia), Afghanistan, Tajikistan, Kirgistan, Uzbekistan, Whatnotistan… one or two co-occurr in China, but those also come from India or Vietnam etc.).

Photography in “Asia” turned out to be much more difficult than in Africa, partly because of different mesh sizes, partly because the birds sat around in places less suited for taking photos through the mesh. However, I got a pretty good documentation of what’s on show, despite some birds not being visible in either the external or internal cages. 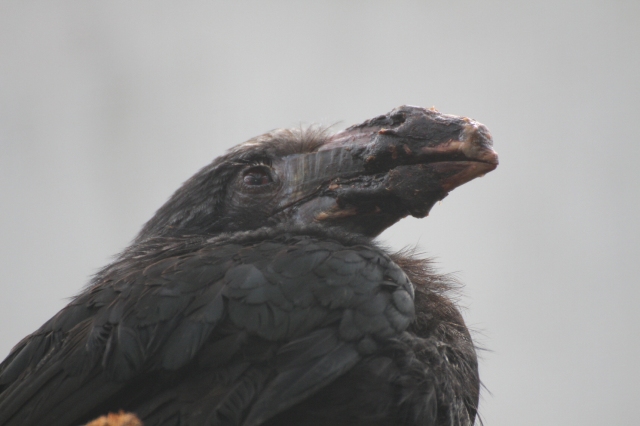 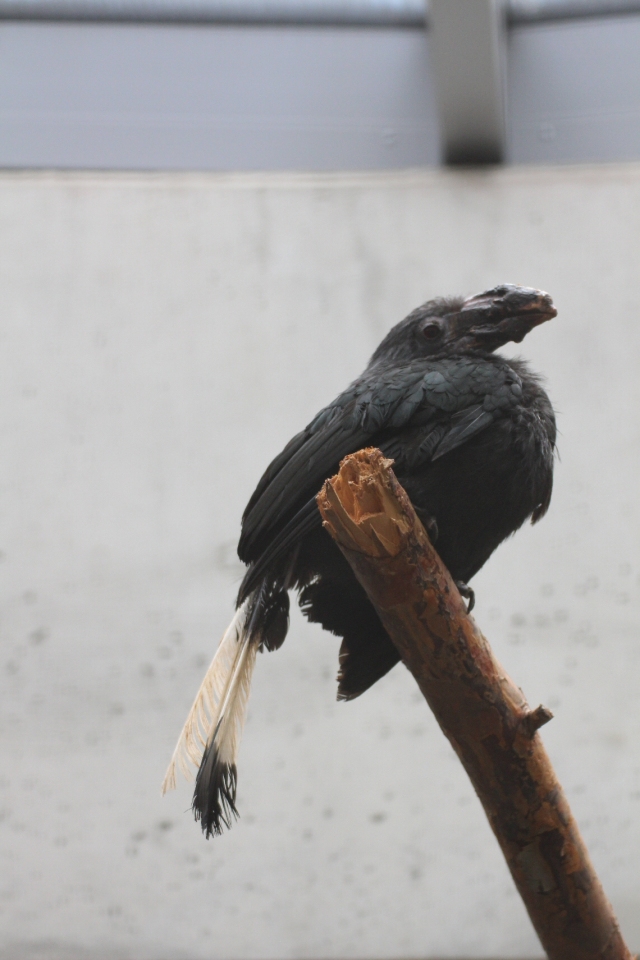 I’ll star and ends this with hornbills. This is a Visayan or Tarictic Hornbill (Penelopides panini). The beak looks not that great, reminding me of other birds I recently photographed with OUCH! on their bills. The Tarictic Hornbill has a nice large cage to itself. Not so the Orange-fronted Fruit Dove (Ptilinopus aurantiifrons), who shares a cage with Blue-faced Parrotfinches – which escaped my attemtps to photograph them. Grrrrrrrrrrrrrrr! 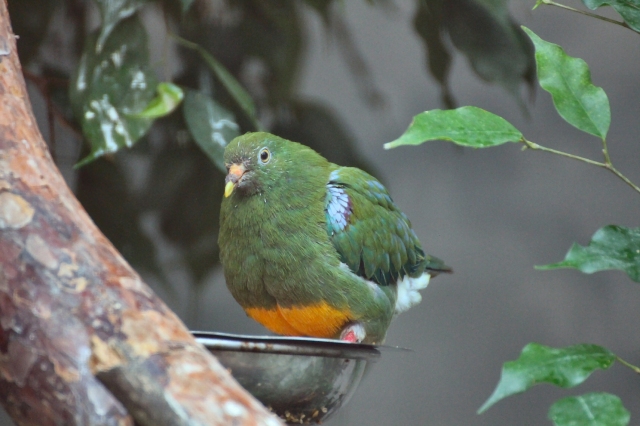 More doves in the next cage: Mindanao Bleeding-heart Dove or Bartlett’s Bleeding Heart Pigeon (Gallicolumba crinigera) bunks – if not in the food – with White-eared Bulbuls (Pycnonotus leucotis). 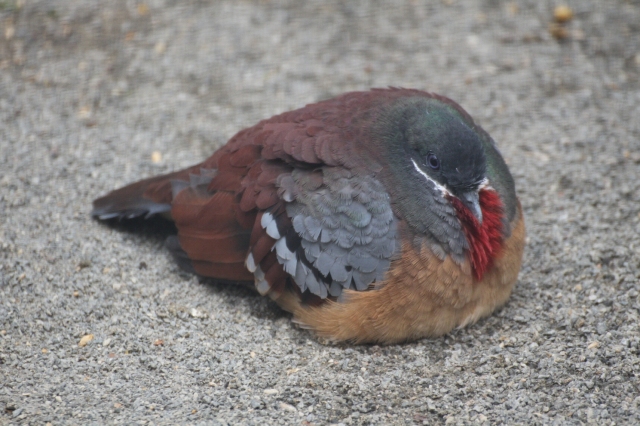 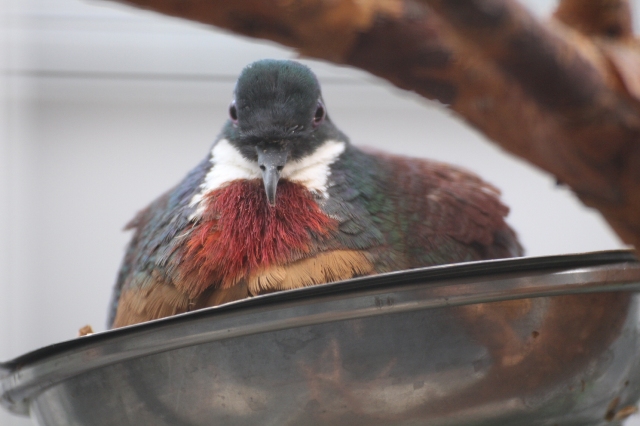 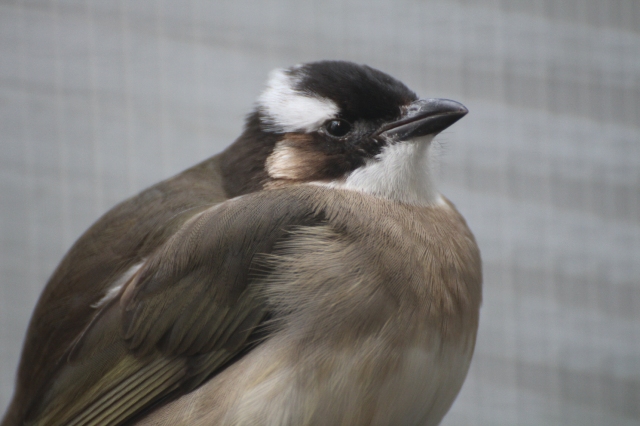 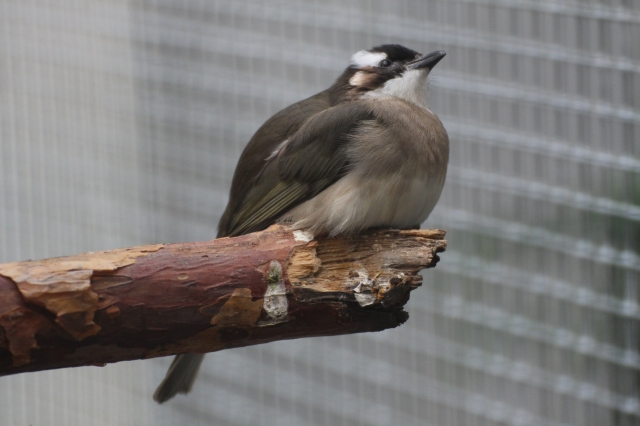 The next cage has a similar combo, with the Chinese or Light-vented Bulbul (Pycnonotus sinensis) 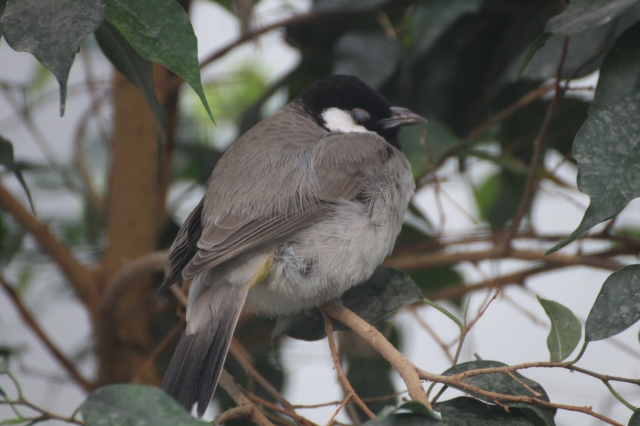 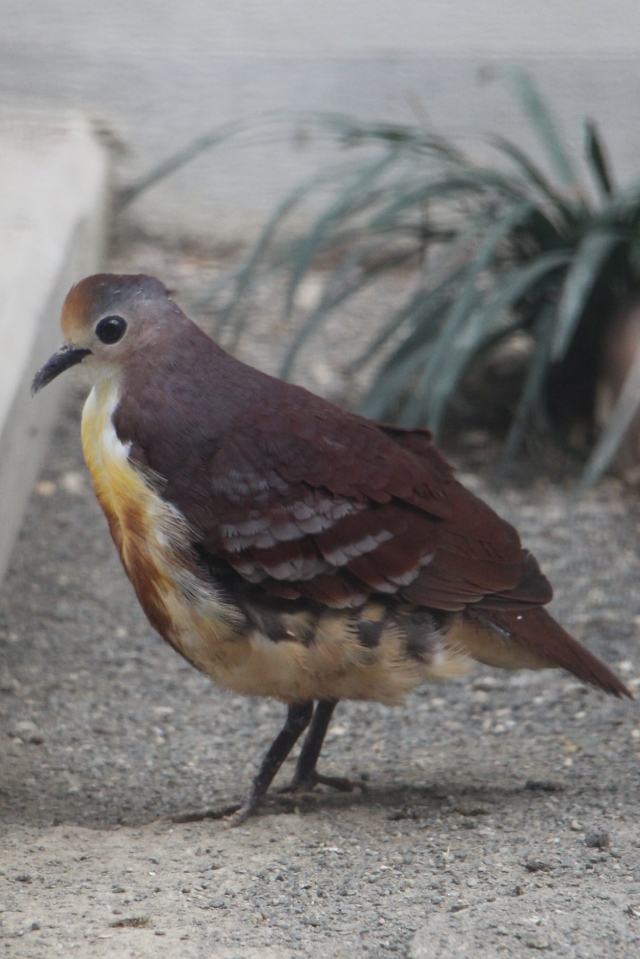 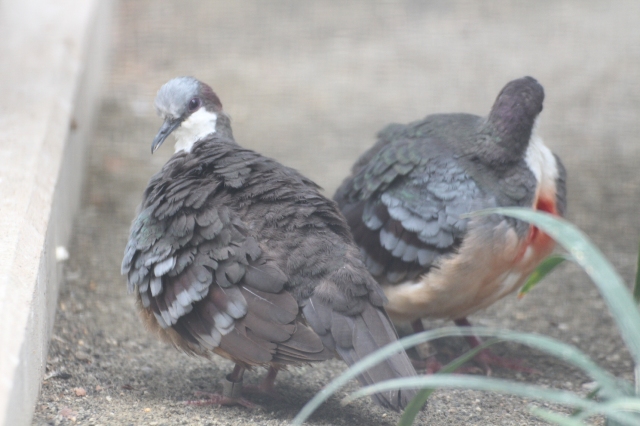 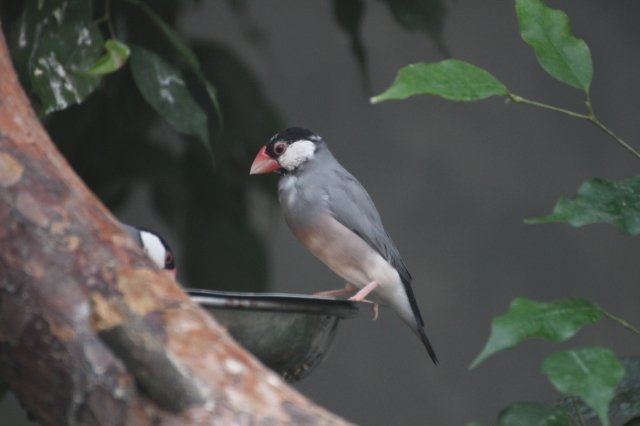 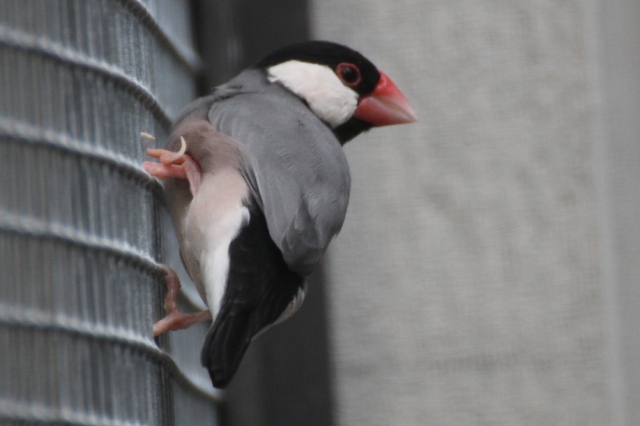 Java (Rice) Sparrows, (Padda oryzivora), hectically darting around the back of a large cage,

Orange-bellied Fruit Doves (Ptilinopus iozonus) – what’s it with doves and feding dishes? – and Three-coloured Parrot Finches – no luck photographing them at all!

An on for ANOTHER dove – Black-naped Fruit Dove (Ptilinopus melanospilus). They share a cage with Asian Fairy-bluebirds (Irena puella). 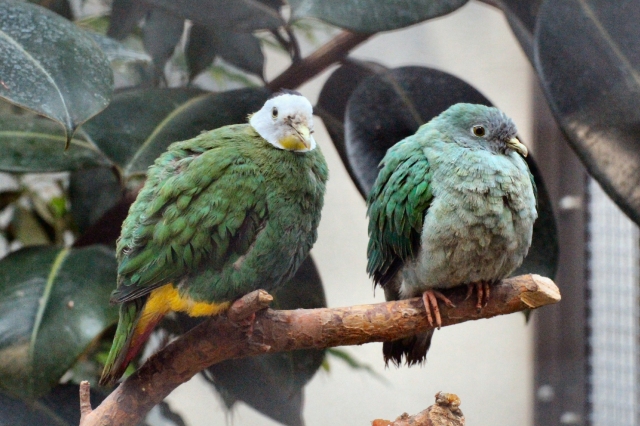 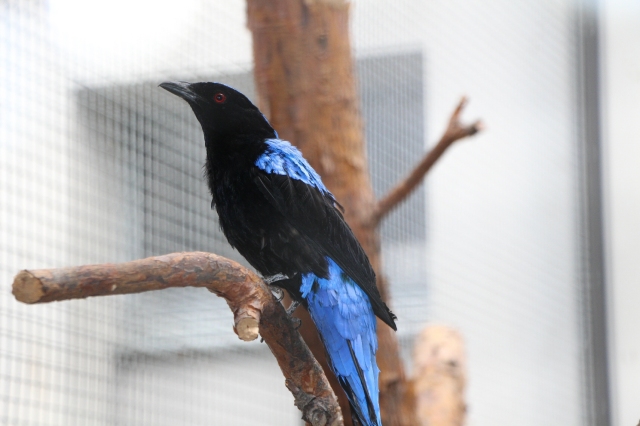 And then a cage with no dove or pigeon! Can you believe it? Brahminy Myna or Brahminy Starling (Sturnia pagodarum) 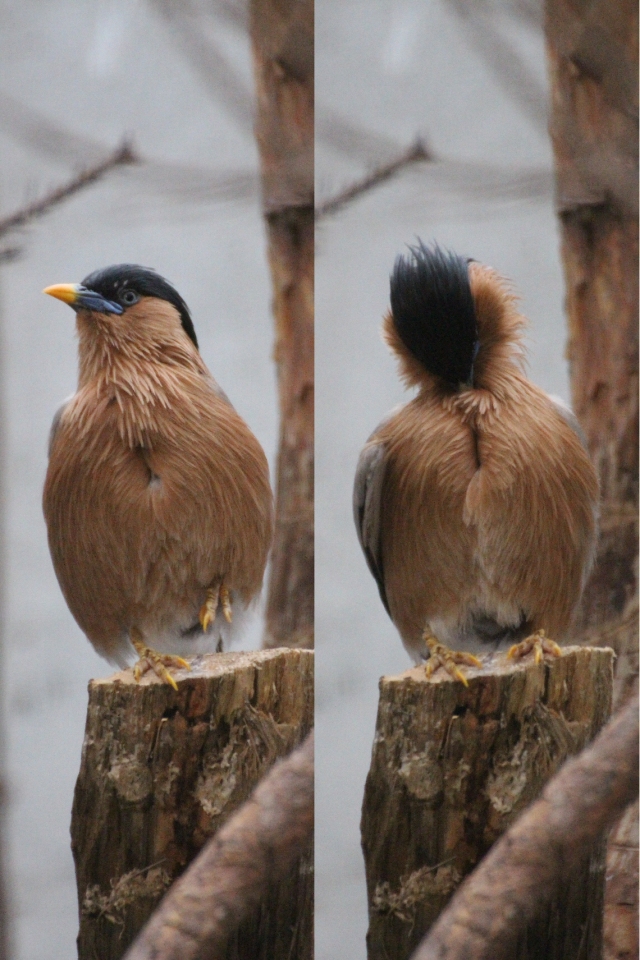 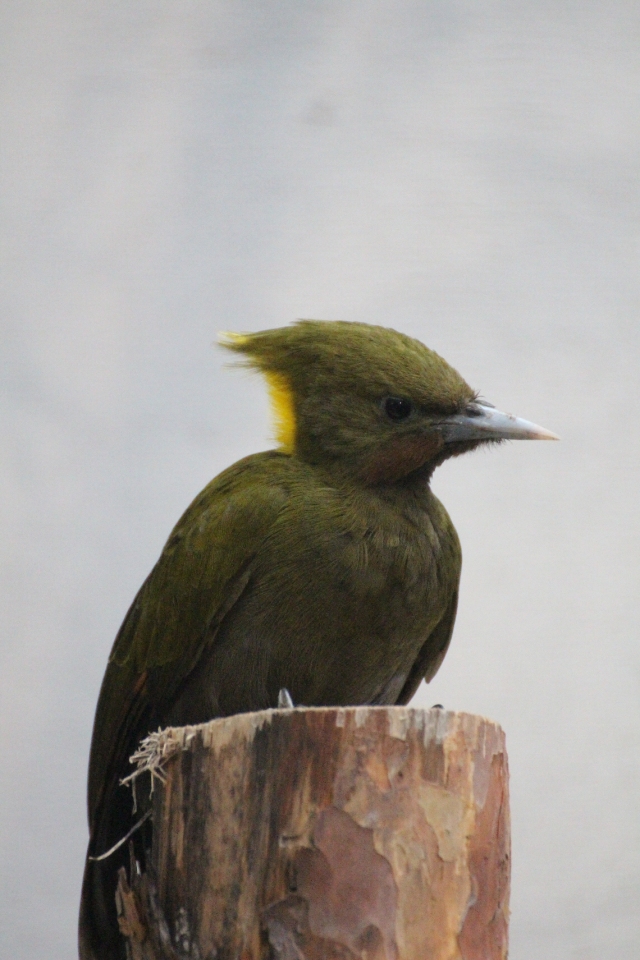 and a Greater Yellownape (Picus flavinucha), very busy cleaning his plumage, and thus presented the yellow nape nicely, albeit with motions too fast to capture well on photos. Further companions in the cage are stupid Crested Wood-Partridges, which bobbed around with their head so much I got no clear shot.

Before we finally get around to the second hornbill, there is one more cage with two species to cover. One of them is – quelle surprise! – a pigeon. And it is neither a Ptilinopus, nor a Gallicolumba! It is….. 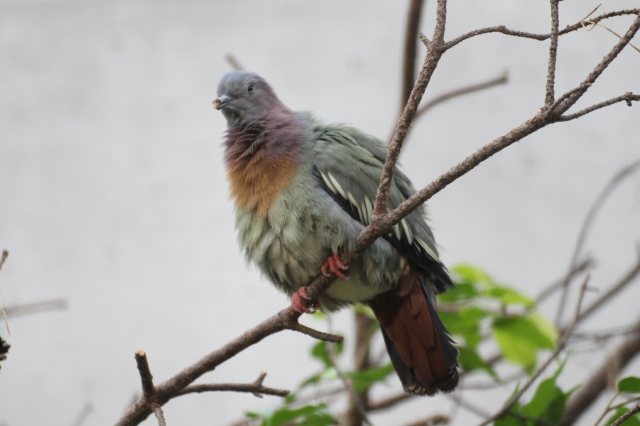 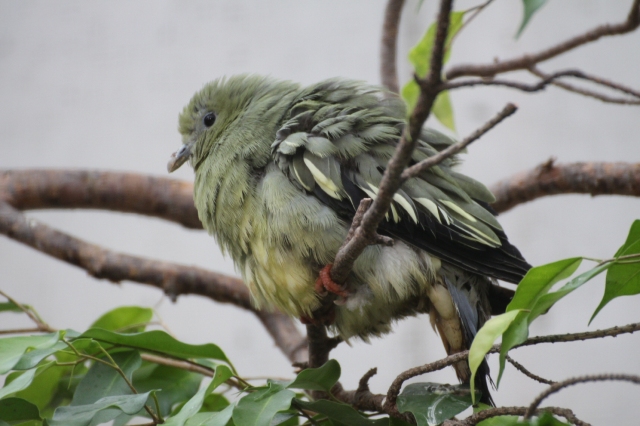 By now I had gotten the firm impression that all the islands and coastal regions between mainland SE-Asia and Australia are full of nothing but pigeons and doves, and doves and pigeons, with a smattering of other birds in the tree tops to keep things from going too pigeonish. The obligatory non-dove in the cage with the Pink-necked Green Pigeon (what a horribly stupidly descriptive name! Treron vernans – so much simpler!) – anyways, the companion for this dove is Goldie’s Lorikeet (Psitteuteles goldiei). Or the Blurry Photograph Lorikeet. 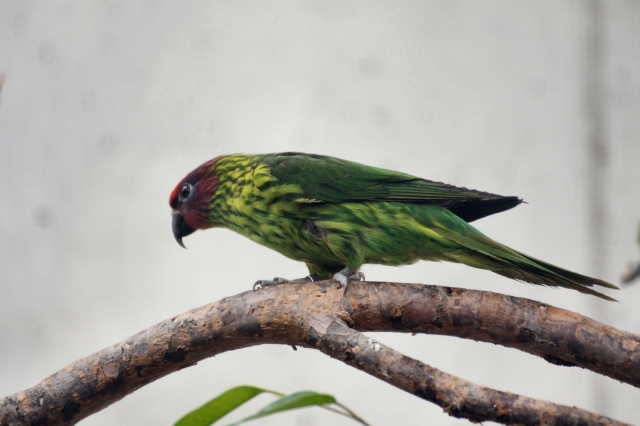 And now we have made it all the way through, and finally come to a magnificent horn bill on a hornbill: the Oriental Pied Hornbill (Anthracoceros albirostris). 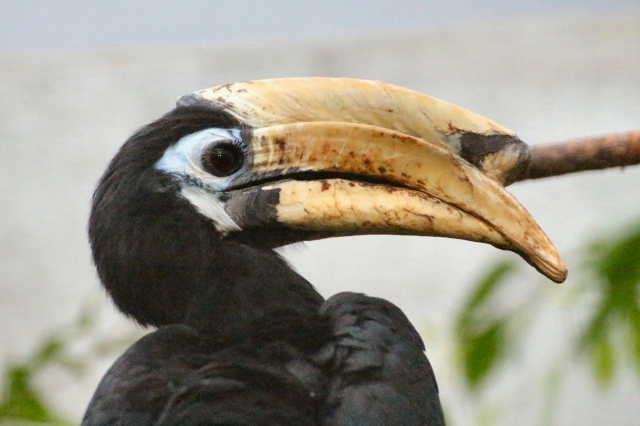 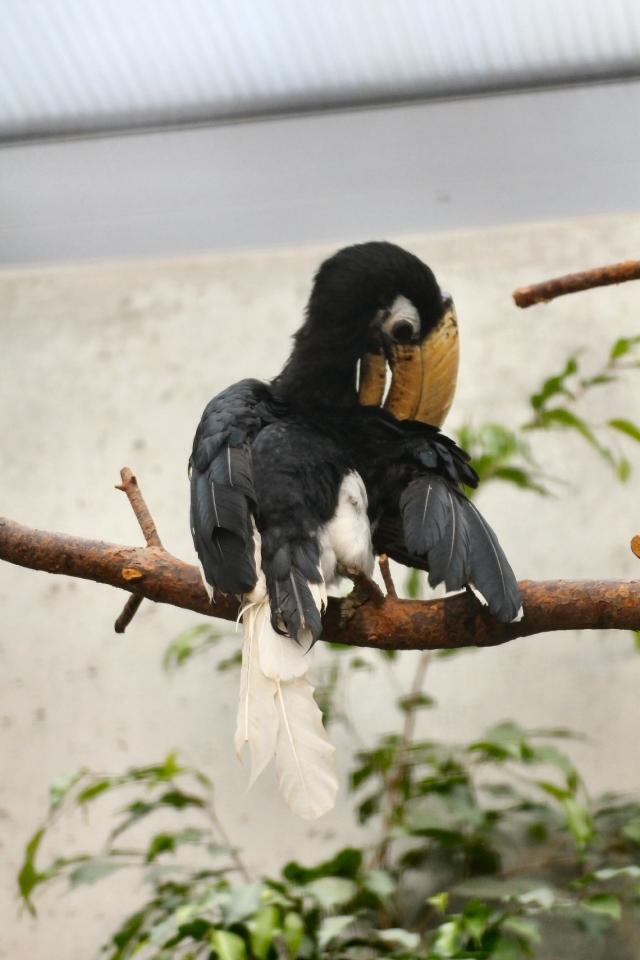 This one actually had the decency to sit still for a portrait shot in between a lot of feather cleaning activity.

And that concludes the tour for today. Next time, we hop over to Australia!