Posted on December 14, 2013 by Heinrich Mallison

In the previous post on the L.A. NHM I gave a quick all-around introduction. Now, it is time to take a closer look at some of the mounted skeletons, and talk a bit about how they are set up in relation to each other and the room.

Let me start with Triceratops prorsus again, as it will usually be the first dinosaur mount you see when walking through the museum. It is, as you can see in the photo in the introductory post, set up on a quite high pedestal. That is always a mixed blessing, as you can, on one hand, see the feet very well and look up under the dinosaur’s skirt (so to speak)…. 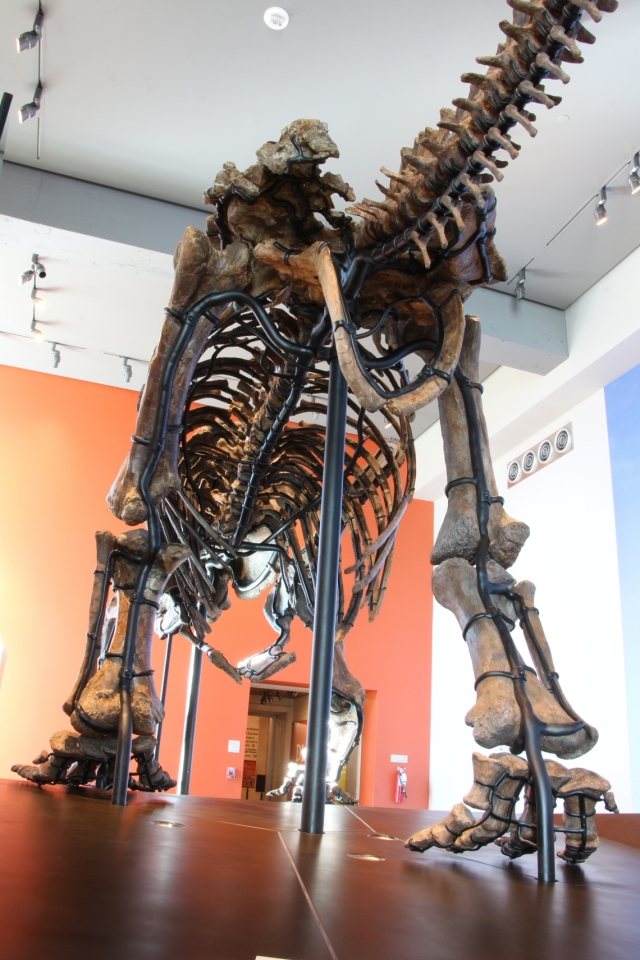 which can be quite an educational perspective. You can simply see a lot of bone and bone-bone contacts that are less easily visible if the skeleton is mounted at ground level. And it shifts the feet more into focus, a much more interesting part of an animal that the stupid ribcage and dorsal spines. On the other hand, you end up looking up at the animal, which makes it larger-than-life. For a similar reason, zoos have long ago abandoned enclosures where people are higher up than the animals, because the animals then look smaller-than-life – in both cases, you get a wrong impression of size and shape. In museums, high pedestals also play a role in the decision on how many railings you need to keep people from touching and breaking the bones. Here, there is a glass wall along the left side, and because of the high pedestal it reaches up only about the knees of the dinosaur.

The mount is a composite, consisting of parts from four different animals and quite some cast material (left forelimb, left hind limb, right fibula and foot, three dorsals and their ribs, distal ~60% of the caudal vertebrae and all chevrons). How do I know? Because, laudably, the NHM L.A. has nice, big, obvious signs up that contain all the information you want:

Ain’t this cool? Specimen numbers, localities, and a nice coloured map showing you what on the mount comes from where. Plus info on when and by whom the fossils were excavated! That, people, is exemplary and highly commendable!

Ok, back to the mount. In lateral and oblique views it looks just like your run of the mill Trike. Once you get close to head-on, though, you’ll notice that the skull is transversely squashed. 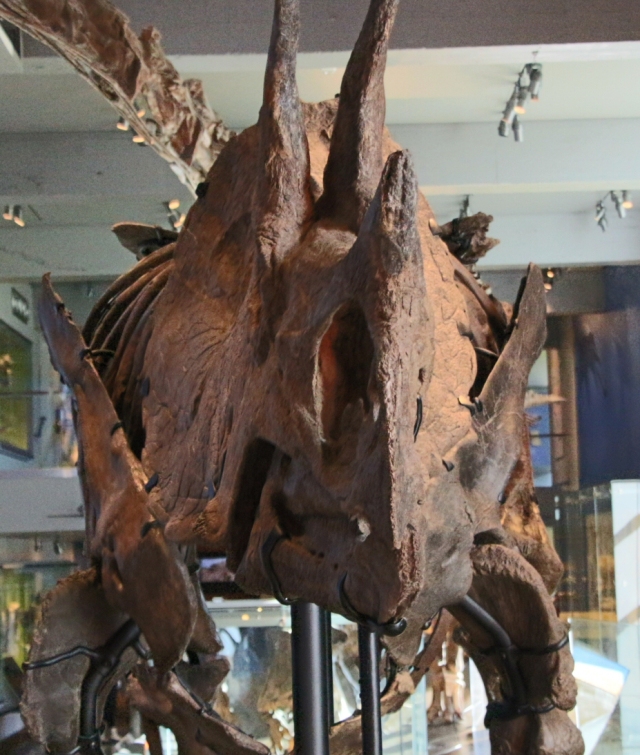 Looks rather outlandish, I must say.

Below, I’ll post two views from the right lateral and left anterolateral sides. They highlight the problem with lighting that this room has – a problem for which I do not believe a perfect solution exists.

Here, I chose a fairly long exposure time, using a tripod, so the bones look well-lit. The right forefoot and the tail tip, in contrast, are overexposed, because of the sunlight streaming into the room. While the human eye is much better than a camera when dealing with bright-dark contrasts, but it still can be difficult to see the bones well when they are back-lit. My eyes are pretty good, but I did see others, especially elderly people, squinting quote a lot. 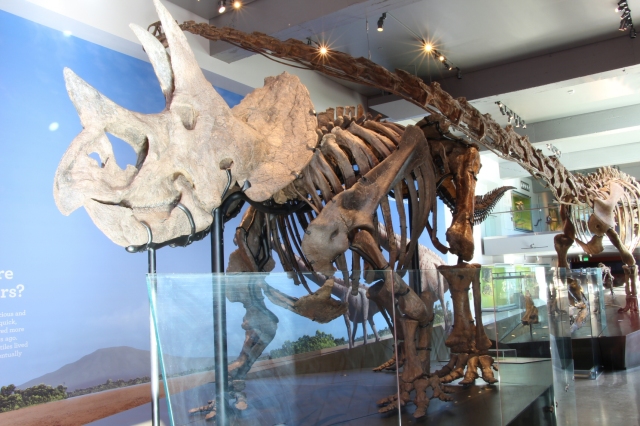 This view also shows the effect of sunlight in the room: the head is over-lit, the rest of the skeleton is in the dark. Overall, however, the effect wasn’t too bad, because the exhibition planners intelligently employed ground-mounted spotlights to light the skeletons.

OK, time to finally take a closer look a the mount. The overall pose is nothing spectacular, with the animal having all four feet on the ground. It seems to be a very slow walking pose. Individual articulations between bones look good, although one might argue for a bit more room for cartilage in e.g. the knees. The ribs are nicely tucked close to each other, instead of the overinflated ribcage I have seen in some other ceratopsians. All in all, the mount looks good, it has the appearance of a real animal, not a freak.

As mentioned, the feet are mostly casts, but they sure look good! Still, I’ll limit closer views to the one real foot, the right front one.

Classy: the bones are all held in cradles and can apparently be taken out easily. Not that this setup is a novel invention; as I’ve previously pointed out in one of the more popular posts on my blog, there are mounts that stem from the direct post-war ear that were done in this way. 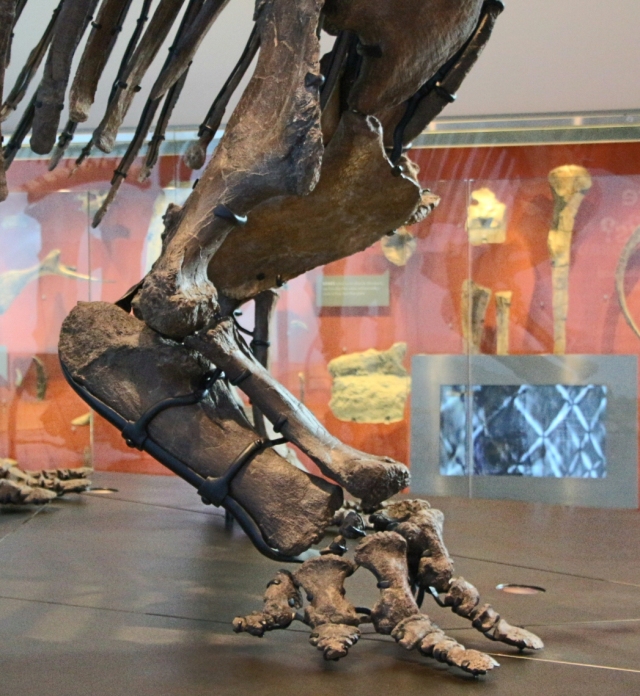 As is the case with many ornithischians, especially ceratopsians and stegosaurs, the lateral view of the lower forelimb is especially interesting. Just look at that absurdly massive ulna, and the absurdly huge olecranon process on it! It looks almost as if Triceratops wanted to play mammal, with regards to the moment arms, but the limb is far too heavy to be in any way comparable to mammals adapted to rapid locomotion. Maybe to rhinos, but although they are quite fast and surprisingly agile, they are still rather clumsy and ponderous compared to cows and other currently dominant terrestrial herbivores. Sadly, also, sometimes too ponderous for humans. Part of that strength is surely a result of the large percentage of weight the front limbs had to carry, just remember that huge skull!

What I also should mention, although the corresponding photo is way up at the top of this post, is the architecture of the hip. Check out how the ischia form a sort of chute for eggs to slide down. And how the broad sacrum displaces the acetabula laterally so that the limb clears the belly a lot easier than in basal dinosaurs. Both things are also seen in sauropods, for example. The former is a very dinosaurian way of doing things, the latter is again reminiscent of mammals. Other notable details? The loose connection of the shoulder girdle, the very ventral placement of the shoulder girdle, and the resulting large space for trachea, oesophagus  and neck muscles between the cervical vertebrae and the sternal plates. Also well visible in the photos above.

Overall, the Triceratops is a great mount, and its placement in the middle of the room makes the most of it: visitors can walk all around it and see it from all angles. It is well articulated, and consists in large parts of nicely preserved original material – what more can you ask for?

Next up will be another ornithischian: Camptosaurus dispar. For now, to end this post I have one more photo, a good-bye pic of the Trike, taken from the gallery at the end of the room. As you can see, despite the high base it is possible to get a good glimpse of the large dorsal surface of the sacrum.

4 Responses to Dinosaur mounts at the NHM L.A.: Triceratops