Posted on January 24, 2014 by Heinrich Mallison

As I am writing this, more and more remarks on the general layout of the hall creep in. I promised to discuss the Camptosaurus next, and I am too lazy to remove those remarks and turn them into a post of their own, so you’ll have to live with the added yadda-yadda 😉

One of the most-ignored dinosaurs of the American West, specifically the Morrison Formation, is certainly Camptosaurus. Aside from the immediate association “camp-o-saur” that gives it a somewhat homey, boring sound, it has no big teeth, no big claws, no exceptional size going for it. Not even baby camptosaurs in spectacular nests or so, just a really scrappy partial embryo (laudably described in loving detail by Chure et al. 1994). BLEH! If you do not believe me, check out the wikipedia page! For such a well known dinosaurs it is surprisingly sparse. The scarcity of information may, however, also have to do with a lack of spectacular research – after all, C. is boring, so why study it any further?

Camptosaurus is a roughly Plateosaurus-sized animal (seems it can be a tad bigger), and has surprisingly similar proportions: a small skull, a long neck, short forelimbs, a body that is easy to approximate with an ellipsoid that has a long axis roughly 1.5 times as long as the two other axes, rather sturdy-looking hind limbs, and quite a long and deep tail. The similarities do not end there, but I won’t waste the material for a good paper right now. Suffice to say that the basic dinosaurian herbivore bauplan, as exemplified in “prosauropods”, seems to have been quite a successful construction – after all, here’s an ornithischian taking it up again to the same size in the Late Jurassic!

Here’s the NHM L.A. Camptosaurus mount in all its splendour. From this perspective the animal seems to be all hindlimbs and tail….. 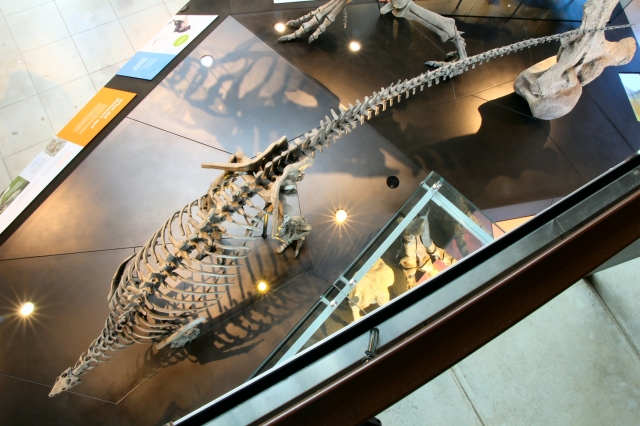 …whereas a look down from the mezzanine level shows quite some bulk in the anterior body. Also, the enormously flaring preacetabular processes of the ilia show up nicely, indicating quite some soft tissue mass around the hip that the other bones alone (e.g., the posterior dorsal ribs) would not immediately suggest. As in Plateosaurus! But enough of similarities, what are the differences?

Aside from the obvious differences in the shape of the hip bones – no flaring preacetabular processes in Plateosaurus, not even any long preacetabular processes at all, non-retroverted pubis (and a very broad one at that) – there are other differences as well, although I am sure they are not obvious immediately to laypeople. For example, instead of the long and slender cervical ribs of Plateosaurus, Camptosaurus has fairly sturdy ones that stick rather far out to the sides. Add to that the fact that as far as we know there are no osteological correlates for air sacs in ornithischians, whereas they exist in the form of pneumatic foramina in the neck of Plateosaurus,and it seems that the neck and anterior trunk of C. was quite a bit heavier for the same size than that of P. Also, the front limbs are quite a bit longer proportionally. If we add that up it quickly becomes apparent why I do not have any issues with the quadrupedal posture of the NHM L.A. mount: Camptosaurus possibly was capable of quadrupedal locomotion! It’ll take me some detailed study to form a firm opinion, but on the basis of what I see and know I can’t exclude the option of a quadrupedal pose right now.

Obviously, I’d like to take a very close look at the elbows and hands, so let’s have a zoomed view of a suitable photo:

There you go, an anterior view of the lower forelimbs of the mount, from a slightly lateral point of view. For those not that deep into forelimb anatomy and mobility, here’s a few pointers: the two long bones of the lower arm, radius and ulna, are here correctly articulated to the humerus, with the slender radius on the lateral condyle, and the sturdier ulna on the medial condyle. Yes, sounds like a dumb thing to mix up, but it’s been done, as I found when I took a close look at Plateosaurus. In museums. Big ones. Also correctly, the radius leads to the thumb, not the little finger. Which explains why the shaft of the radius crosses over the ulna to place the palm flat on the ground. And this is where I do take issue with the mount, although it is not a major point!

Take a close look at the left hand, the one that is on the ground. It is placed so that the entire hand is flat on the ground, i.e. plantigrade. The feet, barely visible in the close-up but well visible in the first photo above, are in contrast digitigrade. I have a hard time believing that an animal with such an unfortunate ratio of limb lengths as Camptosaurus (or even worse, Plateosaurus) would give away the additional forelimb length that a digitgrade or even unguligrade (only the distal-most phalanges touch the ground) posture would give! Especially when we’re talking animals that come from bipedal ancestors, where the by far easiest and simplest way of gaining a support point in front is to put the finger tips down with the palm pointing medially, which is the ancestral direction.

OK, enough of my biomech whining now, and more describing the mount’s effect in the context of the exhibit. Let’s have a look at the whole hall again:

Can you see the Camptosaurus? It is right there, behind the skull of the Tyrannosaurus on the right.

As you can see, the focus of the hall is on something entirely different. Smack in the middle there is a group of an adult, a subadult and a baby Tyrannosaurus, and that’s quite clearly the center of attention. On the inner long side of the hall there are ceratopisan skulls and so on, and the window side was some small stuff on the pedestals that hold the big mounts. The two short sides hold a combined assemblage each, in the photo above the stegosaur-allosaur combo and various others are behind, and the Camptosaurus is paired with a (disinterested in it) Carnotaurus and various other fossils, too.

For visitors, this works very nicely. You can enter either in the middle of the wall behind the position I stood in when I took the shot above, or at the corner to the far right from it. That entrance leads directly up to the Camptosaurus, with the Carnotaurus behind it, and a large glass cabinet to the right. The base below the mounts invites you to circle the two dinosaurs either counter-clockwise (i.c., check out the stuff in the glass cabinet first), or clockwise, which means focussing on the mounts. or you can just walk by and drift over to the rexes, if you’re less into dinosaurs.  I noticed that most people took the last option, but were later circling the rexes in a way that brought them back to the Campto/Carno bit, which they then circled. All in all, the layout keeps people in the room and looking at the exhibits, which means that they spend more time engaging with the exhibit than a classic layout with specimens on the left and right and a big aisle or a one-big-chunk-in-the-middle exhibit would. Berlin, for good reasons, has such a big chunk, and I do see a lot of people passing by half of the hall (the MfN tricks them into coming back later, though).

If you come into the hall at the stegosaur end, you end up walking around the rexes, and on either side your gaze will automatically fall onto the Campto/Carno mounts. Repeatedly, I watched people who’d obviously had enough of dinosaurs already (judging by their obvious impatience and the slight acceleration of their walk) slow down again and take a closer look, simply because the mounts are along their path, but not blocking it.

Here’s a view from the entrance. Camptosaurus looks like the doofus it is.  No, you’re not drunk. I tilted the camera a bit to get the Carnotaurus to fill the entire width of the pic to maximize resolution.

The glass cabinet on the right holds various dinosaur feet, in the back you can see another with a skull of Edmontosaurus and Tyrannosaurus each, to highlight the tooth batteries of duckbills and contrast them with the basal dinosaur teeth and their replacement. Next to them there’s an Argentiosaurus vertebra (cast). I like how the museum combines the various educational bits and the big mounts.

But, OK, back to the mount. One thing I am not happy with on it that I have not mentioned so far. It is pretty obvious in the frontal shot above. Let me show you a closer view from a slightly different angle, one that makes the problem even more obvious: 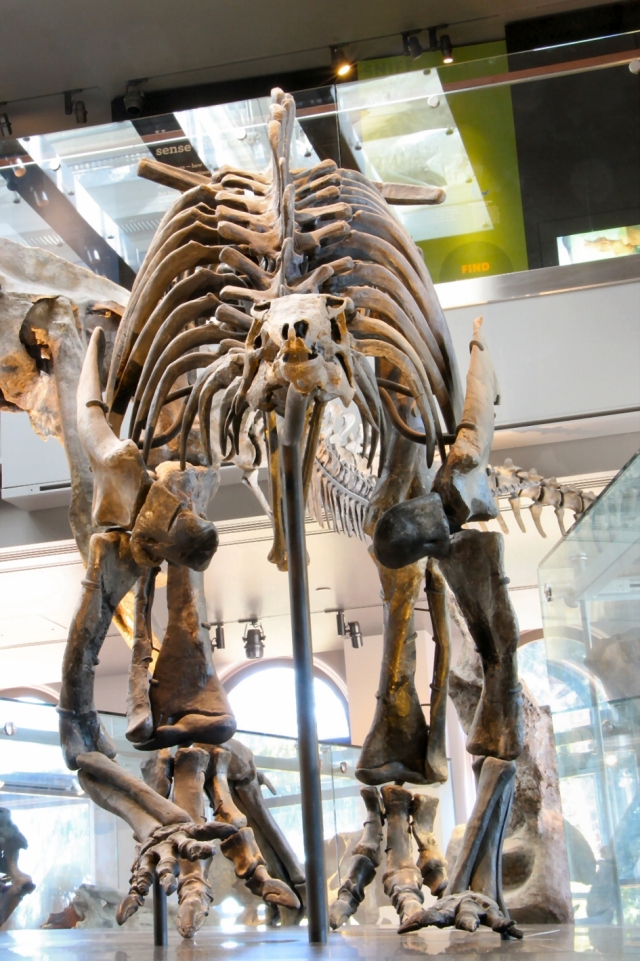 What in the name of all extant and extinct archosaurs is that gap between the coracoids? Did the poor critter swallow a hand grenade and is in the act of blowing up? That gap is wide enough to float a whale through (OK, exaggeration). But seriously: there should not be such a huge gap! There is some debate about how steeply the scapula should be angled, and how high it should be placed on the ribcage, and how much cartilage there was between the coracoids (mostly between&below), and how exactly the sternals were shaped and placed, and whatnot. And yes, sternals weren’t know in C. for a long time, but Dodson and Madsen (1981) described them very nicely. Now, check out a mount of Camptosaurus in the ROM, photo on wikimedia. Much better! (Yes, some people think they were obligate bipeds, thus the warning label on the photo’s page. And as mentioned: more research needed.)

OK, enough on the “boring” ornithischian! Next time we take a closer look at a carnivore, Carnotaurus.

5 Responses to Dinosaur mounts at the NHM L.A.: Camptosaurus