Although I did not start my professional career in palaeontology as a dinosaur researcher, but (can you believe it?) as a palaeobotanist, the Upper Triassic basal sauropodomorph dinosaur Plateosaurus engelhardti from Central Europe has been accompanying me for a very long time. When I started my studies of geology/palaeontology at the University of Tübingen, two mounted skeletons stood in a second floor hall of the institute, which triples as a lecture hall, office and museum building. These mounts, erected under the direction of Friedrich von Huene, still stand there today, although (thanks to a new curator) the room looks much nicer: the window had been bricked over, but has by now been restored.

One of the two skeletons, GPIT/RE/7288 on the right, later became the guinea pig for my doctoral thesis. However, although it is beautifully preserved and nearly complete individual, some parts of the skeleton were replaced for my digital range of motion studied with parts of the other skeleton, informally known as ‘GPIT Skelett 2‘ (on the left). This included the hand, because the left hand of ‘Skelett 2’ is in very good condition compared to the left hand of GPIT/RE/7288. Because the two skeletons are of nearly equal size (in fact, the three skeletons are; ‘Skelett 2’ is a composite made from two individuals), the mixing of the bones was not a problem. However, although many elements of the hands of GPIT/RE/7288 are preserved, I decided to use the complete left hand and lower arm of ‘Skelett 2’ in one piece, so that any problems that might arise from the bones stemming from different individuals would be limited to one joint, and not mess up the wrist of metacarpus.

The bones were all CT-scanned at the University Hospital of Tübingen University, by the very helpful Dr. Ludescher, and I extracted the 3D shapes in long nights at the museum, mainly spent waiting for the computer and hoping it wouldn’t crash again. Comparing those extractions to similar work today just serves to show me how old I am: computers have become so incredibly much faster and have so much more memory that, although I have witnessed the process, I can scarcely believe it.

The resulting files were the basis of my two ‘Digital Plateosaurus’ publications in PE and APP, as well as my thesis. During that work, I limited myself to analyses of the skeletal range of motion that dealt with the big questions of posture (bipedal or quadrupedal) and major limb and body motions. I took quick peeks at foot posture and hand function, but didn’t do detailed analyses, as I did not feel competent to do so. That the manus was mainly a grasping or digging organ, and did not play a significant role in locomotion, was obvious to me from the simple fact that both I and, a short time earlier, Bonnan and Senter (2007) had found that Plateosaurus was incapable of sufficient pronation (turning the palm down) to walk on its hands, and thus had to have been a biped. My modelling of the centre of mass (a line of research that I am still pursuing, see my latest paper in Fossil Record) showed that Plateosaurus was well balanced as a biped, and a bit of whimsical whole-skeleton posing showed that a quadrupedal posture looked rather ridiculous. 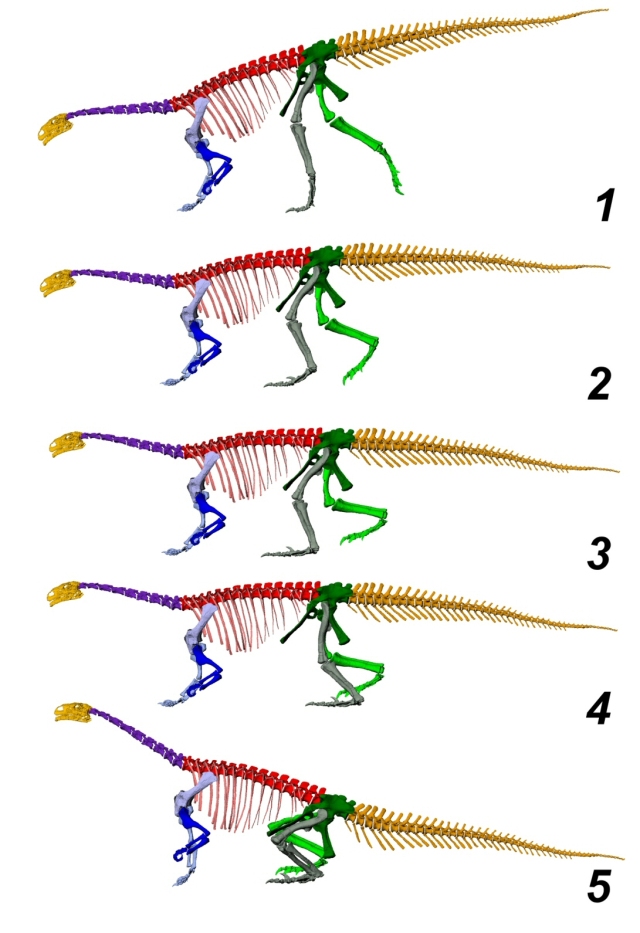 However, a tiny bit of nagging doubt always remained: I knew that there was a lot of cartilage in dinosaur skeletons, much more than in mammals, and what if I had been wrong about the pronation issue because of that?

Skip ahead a few years. I had been busy with other work, but the Plateosaurus hands and feet were still on my mind. And then an opportunity presented itself to come back to one of these issues and do a detailed study of the hand’s ability to support the animal’s weight, or grasp things. A student in Bonn at the Steinmann-Institute, Stefan Reiss, was looking for a diploma thesis topic, and willing to undertake the gruesome task of modelling the Plateosaurus manus.

Stefan dug right in, although we faced a number of challenges. First of all, the spatial separation between Berlin and Bonn, second, the fact that he had to try and serve two masters (me for the computer aided engineering modelling work and Martin Sander in Bonn as the official supervisor of his thesis work and for the palaeontological aspects), third a long and arduous variety to computer problems – it all conspired to make the work more difficult. However, in the end Stefan got things done, and received his diploma. I’ll spare you the ugly details how we managed to coax the data out of the PC, using a software for which support was yanked out from under our feet (don’t you hate commercial programs?) during the study.

Next step, obviously, was publishing the results. Again, things proved difficult. I can today laud Stefan for improving his English a lot while writing his thesis and the paper, but at times I wanted to find all his former English teachers to give them a stern talking-to. Also, because the program had run out of license, as it was not sold any more, we couldn’t happily go and create figures any way we wanted, but had to live with what had accumulated for the thesis. Stefan quickly learned how to handle the Computer Aided Design and the Computer Aided Engineering program, and started out on a series of experiments that I will only partly describe here – namely, as far as they are included in the current paper.

We had decided early on that the paper would go to PE – after all, PE is open access and asks no fees, neither from readers nor authors. That’s because of the funds provided by PE’s sponsors and because of the many volunteers who work for the journal, which includes me in the function of style editor. Unlimited colour figures, unlimited length, a lack of false pretence about the “importance” of the journal and whether the paper is “important” enough – what more can you ask? Thus, off to PE the paper went (and no, I have no influence whatsoever on the editorial process).

In the end, as is often the case, the review process proved very helpful, even though it was a tiny bit frustrating. I sometimes complain that reviewers should not ask that authors “write a different paper”, and for good reason: a reviewer’s job it to check on what you did do, and how you present it, not what you might have done differently for the last six months or two years, if you had back when you started known where your research would take you, and what the personal whims of the reviewer are. In this case, however, the reviewer didn’t suggest that we toss our existing paper, but rather that we re-think the entire publication strategy. He suggested that we cut the paper in half, with the first half being what you can now read in PE. The second half, he said, should be expanded with lots of additional work, and then published as a second paper. And this approach makes a lot of sense: Stefan gets a paper published now, a paper that isn’t too long and over-complex, and we also get to publish the rest of his work, albeit later and after some serious time and money investment. However, that second paper will then really rock!

So we decided not to fight, but to accept this review, and adapted our manuscript as suggested. It now is narrowly focussed on the question: Does the hand of Plateosaurus show a range of motion and robustness compatible with regular use during locomotion? And the answer is a resounding NO! The third finger is long and flexible enough to have been used in locomotion, but it alone is far too weak to carry a significant part of the animal’s weight. The second finger could share the load, but both together are still a far cry from sufficient support. The other fingers are too short, and/or weak, and/or too immobile. What’s more, the pattern of mobility doesn’t fit together, so that the forces would not be properly distributed between the fingers. But, quite the reverse: the fingers turned out to be very good as flexing, thus grasping things!

(What must be kept in mind is that “locomotion” doesn’t mean taking tiny shuffling steps while feeding, but actually going places – sustained change of location. Nobody is saying that the hand couldn’t be used as a prop while the animal was drinking or feeding from the ground.) 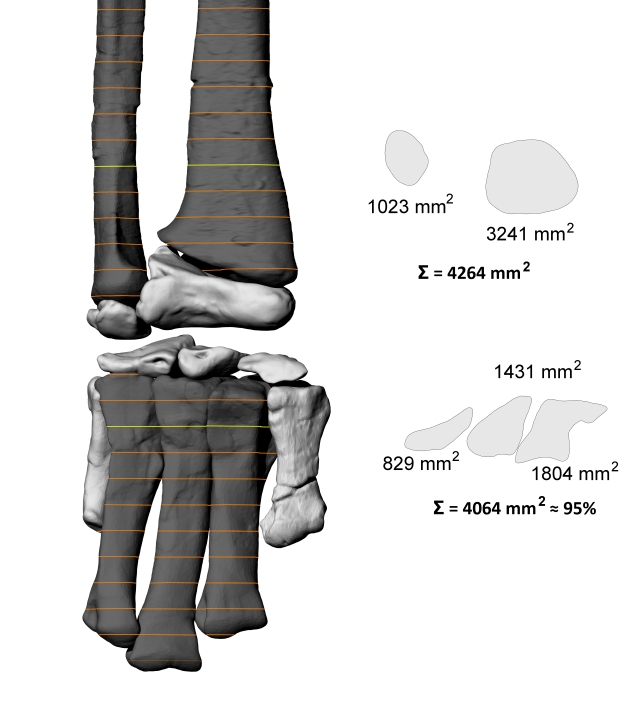 Digitigrade or not? Preuschoft’s method in action on the hind limb of Plateosaurus. The cross sections of the bones above and below the ankle joint that were involved in carrying the animal’s weight (tibia+fibula; metatarsals II-IV) are nearly equal, indicating a digitigrade posture.

Additionally, we used a smart method Prof. Preuschoft once taught me to calculate the relative strength of the metatarsus and lower arm in comparison. If an animal walks in a digitigrade posture, i.e. with only the toes touching the ground, it is reasonable to assume that the sections of the limb are roughly equally robust, because they are under roughly similar loading regimes. Obviously, it plays a role how much weight really is on them: the thigh doesn’t carry the load of rest of the limb it is part of. Also, what angular excursions occur? The bigger the angles the higher the bending loads. But neighbouring elements in the distal limb should see roughly similar regimes. Thus, the cross sections of tibia+fibula (close to the distal end, but not at the articular ends, where shapes are also defined by the necessities of the joint) and the metatarsals should be roughly equal. If, on the other hand, the animal is plantigrade, a big part of the weight is carried on the heel, and the metatarsals can be slimmer. Preuschoft tested his theory on the hands of monkey, some of which walked in digitigrade posture, some in plantigrade, and the results matched the predictions. (sorry, I have lost the reference – oops!) So we did the same thing for Plateosaurus, forelimb and hind limb (data on the latter not in the paper, so see figure above) and guess what: the hind limb indicates a digitigrade posture, but the much shorter forelimbs indicates plantigrady! So, the limb that is too short anyway is further shortened in its functional length by being forced into a platigrade position? That makes no sense whatsoever.

In all, what Stefan showed in our paper is more nails in the already sealed shut coffin of plateosaur quadrupedality. The other part of your combined work, the part that we’re holding back for the next paper, will be more positive, telling us about what the animal could do, not what it couldn’t. That’s always more fun, but also usually more speculative. It will take us a while, though.

My thanks go to Stefan, logically, as well as to Martin Sander and the entire PE team. It is a pleasure to publish in a completely free (no author fee, no reader fee), i.e. true open access journal. I am also very grateful for the two reviews by Matteo Belvedere and Matthew Bonnan! Although one of them gave me quite a head-ache and made us totally re-vamp the paper, both reviews were fair, to the point, and very helpful.