Posted on September 30, 2014 by Heinrich Mallison

Previously, I described a few photogrammetry tests I did with a macro lens, but I didn’t go into the technical details much. Some people have asked me how exactly I took the photos, so here’s the detailed description.

First of all, let me point out a few things that make photography with a macro lens different from normal lenses. There is, for one thing, not really a difference between focusing and zooming with a macro lens. As you focus, the lens extends or retracts and the angle of view decreases or increases. Therefore, you can’t just select your view, then focus – you may end up with significantly more or less on your photo than you intended.

This means that I often find it easier to just leave the camera alone, and move the specimen into focus (or move the entire camera), rather than fiddle with the focus/zoom. That’s easily achieved if the camera is on a tripod, and the specimen is placed on a support that itself slides easily on the table. At the office we have Formica tables and Formica cupboard boards, so I put my turntable on a board which slides well on the tabletop – I can pull or push it with one finger while sitting next to the camera on its tripod. Or, in the case of specimens that do not need to be handled very carefully (such as a modern pine cone), I simply move the specimen around as I please.

In the case of the fossil and extant pine cones I posted on recently, there was no need for a turntable. Nor for a sliding support. I simply manually rotated the specimen the way I wanted to.

Another difference when using a macro lens is the background. Normally, you should try for a undefined background of very even colour, which is either completely ignored by the program, or can be masked using a magic wand tool. Using a macro means that the entire background is automatically totally out of focus – even if you in fact used a Persian rug the program will not find any points. Makes life a bit easier 🙂

So, let’s have a step-by-step playback of what I did, using this detail model of one cone scale I made. 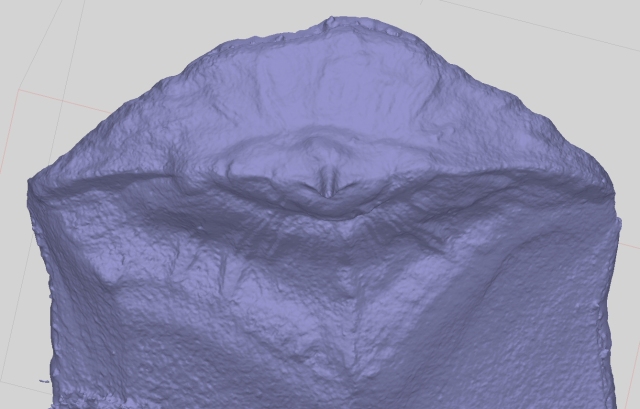 1 Response to A more detailed take on Pinus macro photogrammetry