Posted on February 17, 2015 by Heinrich Mallison

Yesterday, I posted some pictures that I took with a fisheye lens. As mentioned, one has to be hellishly careful not to get into the picture by accident. Well, I mentioned lying down on the floor……. 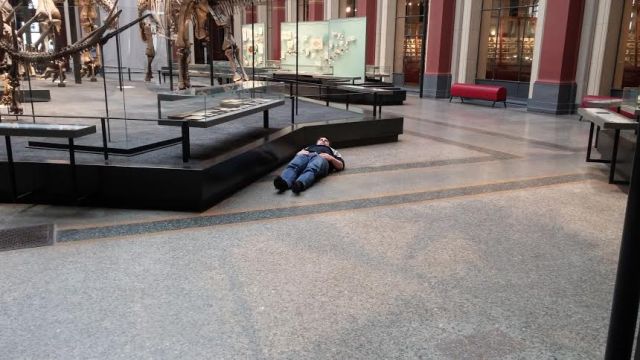 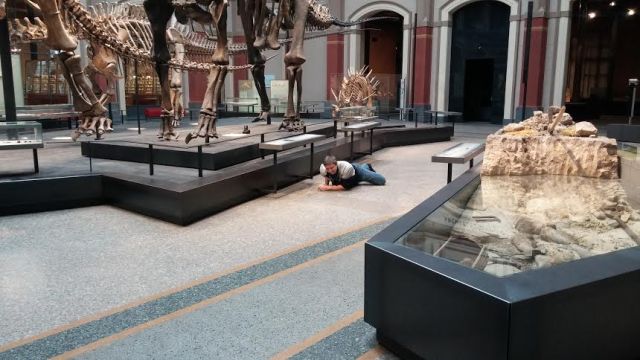 Note the camera under Diplodocus‘ belly.

Also, I took an unintended selfie. My tripod head allows tilting the camera down to 90°, and up to 45°. If I want to tilt it any further, I need to reverse it: take it off, loosen the screw that fixes the holder plate to the camera, turn the plate around 180°, then fasten the screw again and set the camera back onto the tripod. I did this without turning the camera off, and because it was in liveview mode, where you can release the shutter by touching the liveview screen, and because I happened to brush against the screen when I set the camera back into the bracket….. well, the camera was, due to the rotation, pointing in the exact opposite direction of “upward at Giraffatitan” 😉

There you go, critical looking palaeontologist with Elaphrosaurus. Needs a shave 😉

I'm a dinosaur biomech guy
View all posts by Heinrich Mallison →
This entry was posted in FUN!!!, photography. Bookmark the permalink.