Tristan the T. rex is here!

Posted on December 16, 2015 by Heinrich Mallison

And here he finally is: Tristan the Tyrannosaurus rex!

As of a few seconds ago the press embargo has ended, and I can finally show you all what a wonderful specimen I was press-ganged into living for allowed to work on during most of 2016. 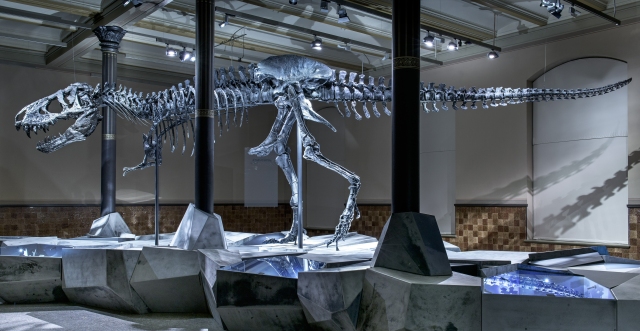 Tristan is a loan to the Museum für Naturkunde by Danish businessmen Niels Nielsen and Jens Peter Jensen. Actually, its full name is Tristan-Otto, after the sons of Niels and Jens Peter. The story of how the two businessmen came to loan the specimen to the museum has been dragged through the press repeatedly, and will be repeated a few more times. Therefore, I’ll rather focus on how things unfolded for me, and show you all the wonderful photos I took of the specimen and the dig site visit and so on – all the photos I had to keep secret for so long.

It all started for me on January 3, 2015, with an email from MfN-director Johannes Vogel – he of the luxuriant mustache and Darwin relations. As the email was sent in the evening and as I had (atypically) turned off the ringer on my cell phone, I read the email on January 4, and for a split second got confused with 1/4/2015 and 4/1/2015. After all, this just had to be a hoax:

Mr Nielsen is travelling in from London on thursday 08 Jan To discuss T. rex coming to berlin as early as September 2015! […]“

April 1, right? A quick check of the calendar and verbal confirmation by my wife convinced me that it was Januray 4, though.

Well, this email was quickly followed by a meeting with Niels, who turned out to be a very polite, friendly and smart person with a love of museums and dinosaurs. He was clearly impressed with the dinosaur hall in the MfN, and could see us exhibiting Tristan in suitable surroundings. And he asked a lot of question about the research we would like to do. Obviously, such questions are hard to answer unless you have actually had a close look at the skeleton and the quarry it came from, and all we could give him was a list of interesting topics. But Niels understood the limitations readily; he was looking for indications of our ability and willingness to study the fossil bones themselves, T. rex as a taxon and the life history of Tristan. Apparently, what we offered pleased him, as he agreed to loan Tristan to the MfN, initially for three years. 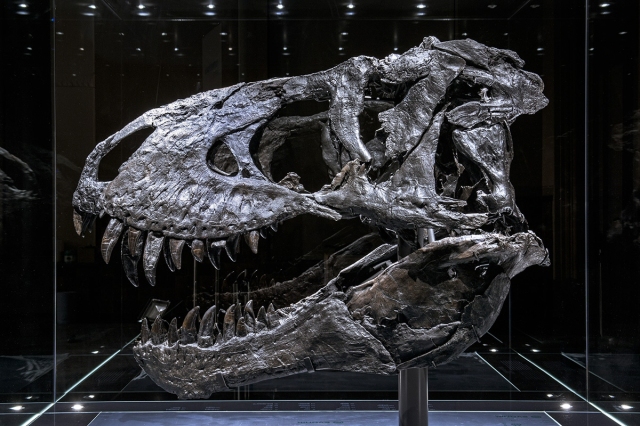 Soon after I was on my way to the US to see Tristan for real. I won’t go into all the details of the travel here, suffice to say that we had great fun with quite some snow and the promised 4WD car that turned out to be front wheel drive. When we finally reached the firm doing the prep work we were greeted warmly by kind people who fully understood that we didn’t want to spend a lot of time on polite chit-chat, but rather wanted to dive right in. And this is what they showed us first of all:

I was wow-ed! And then we were shown the teeth (you can jsut make out the box at the top of the photo) that had broken off, and quickly realized that an unusually large number of teeth had been preserved, considering that the skull had come apart completely before burial. There were other parts of the skull around, too: the braincase, a quadrate, and so on. All in all it was clear right away that Tristan was a very nice specimen indeed 🙂

My colleague Oliver Hampe immediately sat down to check out the bones for potential injuries and other pathologies, whereas I started photo documentation for (rough) 3D modelling. 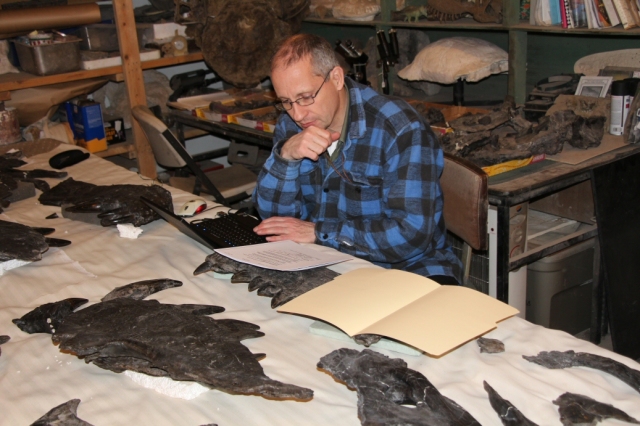 We spent wonderful days in the workshop checking out the bones of the great theropod in detail, and occasionally went outside to see how the local extant theropods were coping with the Pennsylvania snow. My personal expertise with individual bone shapes is now, because my research has always focused on whole animal motions and body part motions, not detailed anatomy. Still, I have had a close look at tyrannosaur skulls before, and I gained some experience with both saurischian and ornithischian bone anatomy when I mounted the 3D skeletons of Plateosaurus and Kentrosaurus.

Let me show you a few photos of the assorted bones in their mostly cleaned but not yet glued state. 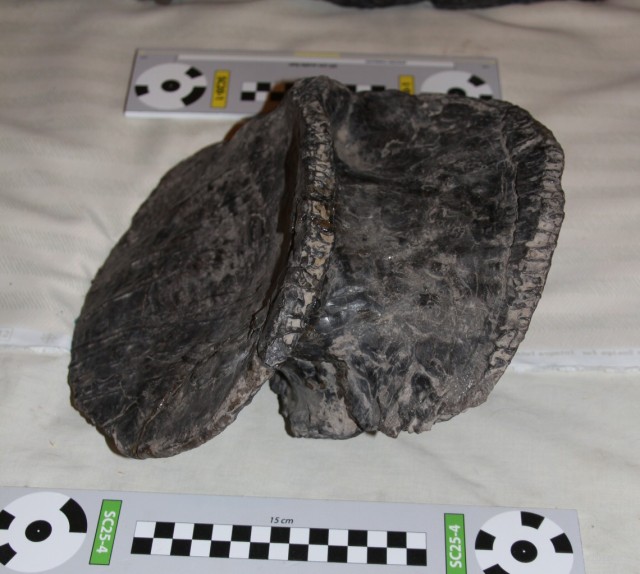 A dorsal centrum, which somehow got caught between the Klitschko brothers and is accordingly deformed 😉

Parts of an ilium. At this point in the preparation process there were still a lot of small fragments around that needed to be cleaned an sorted. Many of them fitted larger bones, including the ilia.

The left scapula, part 1. Although much was still in bits and pieces, Oliver and I very quickly saw that Tristan was more than just a beautiful head, but also a lot of postcranium. Some of the bones are in exquisite state, others looked as if a T. rex had sat on them, but were still easily identifiable. Back in Germany we were able to tell our colleagues that Tristan would be an exciting addition to the exhibit and the museum’s research. And we were able to start planning……
The exhibition team got right down to it, with a little help from a friend. I used a very rough 3D model to plan the pose of the animal, in close consultation with Niels. That was great fun: sitting down with the model in a CAD program and playing around until we found a biomechanically feasible and dynamic – and fit into our exhibition hall. In the end, Tristan ended up in a slightly different pose, a bit less dynamic, due to factors out of our control.

One important decision was taken very early, and now created a lot of work for many people, including me. We wanted to show the wonderful skull separately, at the visitors’ eye level. This way, it would not only be better visible than if we had mounted it on the skeleton, more than 3 m above the ground, but it would also be better accessible for researchers. Obviously, the skeleton would need a cast of the skull, after all we did not want to exhibit Tristan as a headless chicken! That cast, due to it being less heavy than the real skull, would also allow the armature to be lighter and thus less visible. A win on all fronts.

However, casting the real bones is not only time consuming, but also carries a risk of damage, especially if it has to be done quickly. Niels early on decided that he would prefer, if possible, to have the skull scanned and 3D printed. Which meant that someone would have to do the scanning at a very high resolution. After a commercial enterprise failed to produce sufficient results, with the skull already in Berlin, the task fell to me. I always brag how easy and good photogrammetry works. Well, here was my chance to prove it, on an especially difficult object. Part of the problem I already described before. In essence, “black”, “shiny”, “complex shape with deep recesses” are the three worst attributes a specimen can have for photogrammetry. Tristan had them all. With the able help of my colleague Matteo Belvedere and with the use of cyclododecan spray (about which Uwe Moldrzyk, our Tristan project head found out), we managed to get good-enough-for-printing files of all the bones. 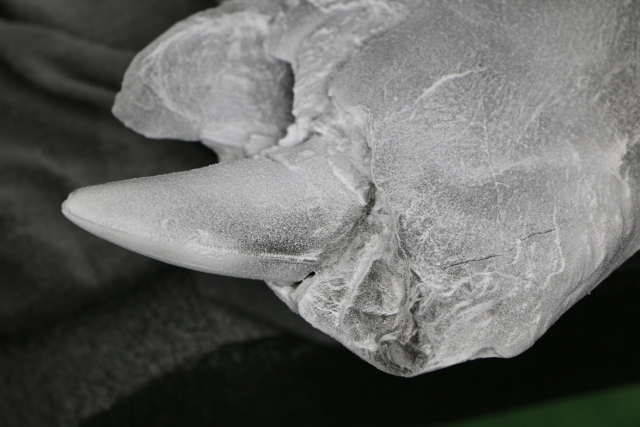 Cyclododecan spray creates a thin layer of a waxy substance, which makes the bone non-reflective and non-black, solving two of the photogrammetry problems. The substance evaporates very slowly, so there is sufficient time to photograph but two days later the bone will be clean again. We had two small problems with the spray. It would create tiny globs on the bone, which are now visible as 3D structures in the models, and when we lifted to bones to flip them over we would obviously smear the spray, which obviously changes the optics and making photogrammetry harder. In the end, however, we managed: 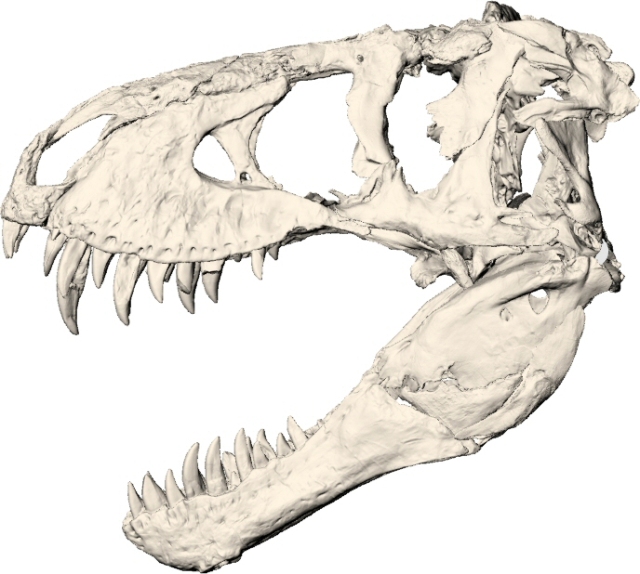 more in the next few days 🙂

17 Responses to Tristan the T. rex is here!