some more pictures of Tristan the T. rex

Posted on December 20, 2015 by Heinrich Mallison

When Niels Nielsen, his brother and I sat down to plan the posture for Tristan we faced a few limitation. Obviously, the posture had to be biomechanically possible. We also wanted it plausible, i.e.: we wanted to show the animal in a pose that it probably used regularly, and not just some freak thing. Also, the room it is shown in poses some limits. It’s height means we can’t show Tristan sky-falling (as if we wanted to), and there is a row of cast-iron columns down the middle of the room, too. Additionally, there is only one entrance, so the skeleton had to placed in the hall in a way that allowed a circular path around it, with people coming in through one half of the big door and going out the other, separated by a mobile barrier.

It was quickly clear that neither Niels nor the museum wanted Tristan to be posed sitting down, mating, or jumping (not that I think the latter a biomechanically very feasible option anyways). As a standing pose is not very dynamic we were left with some sort of rapid locomotion pose. Because Tyrannosaurus was a poor runner, as has been amply shown, this left a slow run or very rapid walk pose. Which I guess 80% of all mounts worldwide show. In the end, after much playing around with different options, we decided on a running pose in which Tristan is taking a sharp left turn around a “tree” – one of the cast iron columns. However, Tristan has just noticed the tiny figure coming into the room (the visitor) and has swivels his head around. Decision time – continue going left or snap up the human for a snack? 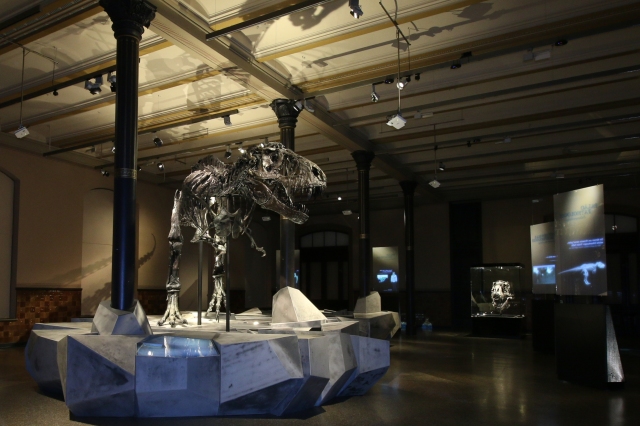 This is the view from the door, and as you can see the posture as mounted doesn’t match exactly the pose I described above. What happened?

In order to be able to plan properly I created a roughly scaled 3D model of Tristan. It is nothing but a quick&dirty photogrammetric model of famous AMNH 5027, with a 3D skull based on Stan (BHI 3033), scaled to match the expected size of Tristan. Additionally, I used floor plans and some quick manual measurements to recreate Saal 14 as a very rough model. I’ve shown this in the last post in one view:

A top view of the hall, with colored arcs showing the field of view between columns from various points. Note how the tan one on the bottom left is planned to show the entire animal without obstruction in a right lateral view. I also made sure that the light green one gives you a chance to take a left lateral view photo in which the column in the middle does not hide the legs.

Also, note the quite strong lateral bending of the torso and the strong rotation between the long axis of the ilia against the torso and against the legs. In fact, the left foot, supposed to be at the very end of the support phase, is massively in-turned. If you draw a straight line over the metatarsus and toe three it roughly points just to the left (in the animal’s view) of the bottom column. The hips point slightly further left, whereas the right foot, just before midstance, points even further left. That’s a pretty typical pose for having made a strong left turn over the supporting (left in this case) foot and continuing over the other foot. Once the posterior foot lifts off it should immediately abandon the in-turn.

As mounted, Tristan shows the intended lateral bending of the torso. For reasons unknown to me, however, the right hindlimb and hip were mounted without the strong left-twist, and the left foot was kept in-turned despite having been altered to be posed just after toe-off. Therefore, it should actually have been moved to point more forward rather then inward. As a consequence of the rotation of the hip out of the planned position, Tristan’s tail tip now is a lot closer to the wall than intended, and the pose looks less energetic. Additionally, for a bunch of reasons, the skull is not turned to the right quite as much, so that Tristan’s nose isn’t pointed exactly at the door. The pose is still quite dynamic, but my pre-planned side-view photo location is ruined, because now the skull is rotated so that it is seen in posterolateral instead of lateral view.

Another view does work out pretty well. If you come into the room, turn left and walk around, then pass the row of columns again at the back end of the hall, you can look right and see this:

Peekaboo!
In fact, this is intended as a quote of the Allosaurus cast mount in the dinosaur hall, which has its head stuck out into the entrance hall (where the head is fleshed out, whereas the rest of the animal is shown as a skeleton). The Tristan mount is quite a photogenic thing from this position, as you see the neck and skull against a bare wall as background, quite uncluttered.

Tristan’s real skull is exhibited “like a jewel” (as a radio station put it today) in a glass cage at the end of the hull. There are no non-glass supports at the corners, and the entire hall is dark (therefore hardly anything reflects on the glass), so that the visitor’s view of the huge jaws is practically unhindered. Discreet spotlights give enough light to see the bones well without putting big highlights on them.

In various places around the hall the exhibition team placed see-through screens on top of steles that carry text placards posing the research questions we will try to investigate. Onto the screens beamers project videos with text and film. Much of that is…. well, I’d say it is more funny than scientifically pleasing. The extremely short preparation time meant that we had to use a lot of stock imagery, with the predictable result that the motions of animals look rather horrible. Bouncy, floppy, physically impossible – you name it. Still, the short presentations summarize our knowledge and proposed research quite well. Deplorably, however, they also include videos of the researchers, filmed (obviously) with the help of greenscreens. Those bits are kinda cheap-looking, and in fact pretty hilarious! I, for one, was asked to walk quickly on a treadmill, and the video now shows a T. rex coming after me. However, the treadmill (obviously) had no rail to hole on to and was uncomfortable short for someone my size. Also, they kept telling me to look over my should at a Rex that wasn’t there – and the combined video places it in slightly the wrong position relative to me to make things work. I had a good laugh when I saw the final sequence. It is kinda nice, though, that you can see Tristan through the screens, as long as the presentation isn’t too bright.

Your truly not-running from a fat, transparent, flollopin abomination of a stock-video T. rex.

Overall, however, I am very happy with the exhibit! Once again, the MfN exhibition people and graphics designers and all have done a masterful job! Add to that the extremely short timeline and all the mishaps along the way (like the skeleton arriving way too late, the replica skull getting done at the last minute, and so on) and it is a miracle that we could open on time.

4 Responses to some more pictures of Tristan the T. rex