Posted on February 25, 2012 by Heinrich Mallison

I’ve shown you some of the palaeo art and the stained glass windows with marine animals of the Berlin Aquarium before. Here are the remaining palaeo art reliefs and tile mosaics, those that grace the front facing not the zoo, but the road. Over the entrance, where there is a Triceratops head on the zoo side, the roadside front has two lizards: 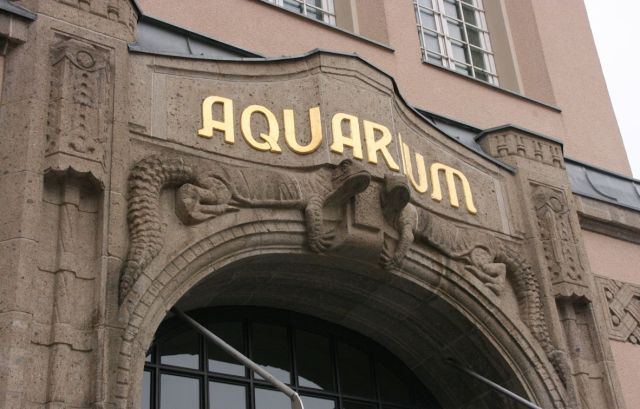 Where the zoo front of the building has three colored tile mosaics and unicolor reliefs each, the roadside front has four each. Let’s start with the tile mosaics: 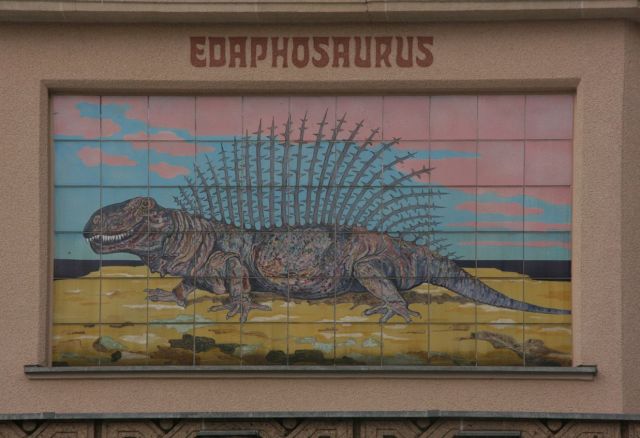 Edaphosaurus – compare to the model in the Urzeit Park. Looks like someone has been gnawing the sail 😉 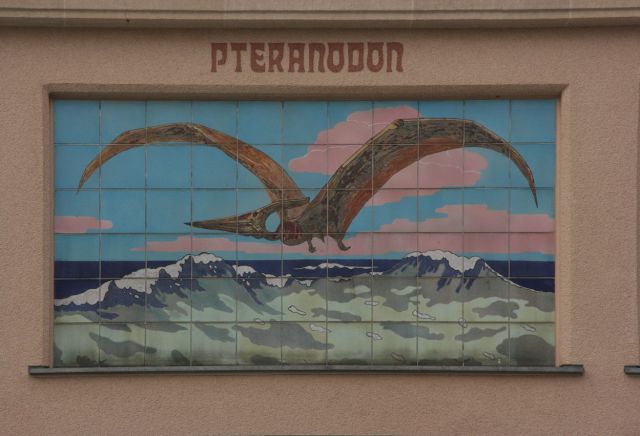 Pteranodon looks pretty cool, kind of like a Mesozoic albatross.

An ichtyosaur – never mind the Ichtyosaurus caption; back when these were originally designed, many finds that today are considered to be genera of their own were placed in I. Aside from the somewhat funny neck these look very cool! But then, the Holzmaden specimens with skin were known, so that getting the soft tissues roughly right was kind easy. In the Aquarium they have one of them – one without skin, though:

Continuing with the life reconstructions on the outside, we get a plesiosaur. Now, all that creeping-out-to-the-shore-to-lay-egg stuff is, well, wrong, as far as we can tell (link to a Switek post only; Brian I can trust to give an excellent and accurate report. Google “live birth plesiosaur” for more reports. Original paper here [paywalled – aargh!]).

And that’s all of the color ones; on to the reliefs:

Continuing the marine reptile from the Mesozoic theme is Nothosaurus. That reconstruction is – let me be diplomatic: appropriate for the time of its creation. 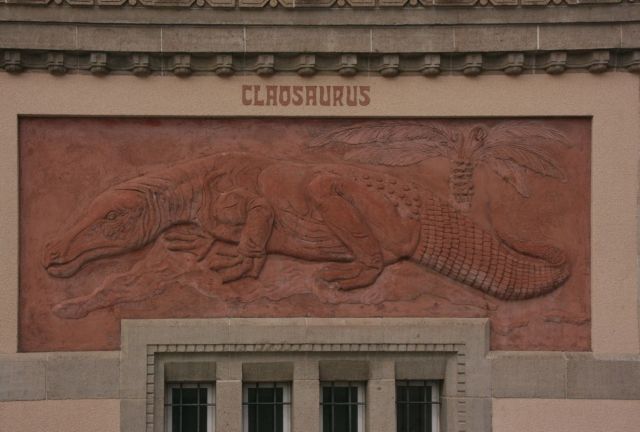 erhm…. I am at a loss for words: how you can turn a hadrosaur like Claosaurus into something like a varanid with overlong hind limbs and a freak skull – no idea! The type skeleton was messed up (hence the name) but complete enough not to get the arms and body shape so horribly wrong. Are we – again – talking preconceived notions? You bet we are. Here’s another example

and finally, another dinosaur force-sprawled:

and what happened to the thagomizer????

I have some more pictures of art on the walls of the Aquarium building, but that’s for another post.

I'm a dinosaur biomech guy
View all posts by Heinrich Mallison →
This entry was posted in Aquariums, Berlin, Dinosauria. Bookmark the permalink.