In the first post of this series I gave a short introduction to the town of Haarlem (NL), because although it is not very dinosaurian or otherwise palaeontological, and thus should not get a post of its own, it does play an important role for the experience of visiting Teylers Museum. This post I’ll show you the museum building inside and out, and tell you a bit of its history. In the first post, the museum’s front showed up already, and now let’s start this post with a closer look at it.

Quite a grandiose facade, and (to be perfectly honest) a bit overdone in my opinion. Part of that is the lighting, but even in daytime it looks rather like someone planned the entrance to a huge palace, then had to downsize it to 50% size and cut the wings due to monetary constraints, but kept the design.

To the right of that huge entrance door there is a sign – now outdated – giving the opening hours. The summer hours are nothing spectacular. Off the top of my head (I am an idiot and did not take a picture),  the museum used to be open from 10 a.m. to 6 p.m. or so. Things differed in winter. In October and March it was open 10 to 5, in November and February from 10:30 to 4:30, and in December and January it was open from 11 to 4. For a very simple reason: there was no artificial light in the building! Once it started to get dark outside, the museum interior went dark as well.

Today, things have changed a bit, mostly with the addition of a new wing with modern comforts, but also with the installation of emergency lights in the old rooms, plus a few additional lights. Still, in the late afternoon in winter you do not stand much of a chance of seeing the fossil halls too well.

Which brings us to the most important point, the thing that makes Teylers Museum so special: it hasn’t changed (much) for over 100 years! It is not only a museum of art, palaeontology, scientific instruments and many other things, it is also a museum of museums! In fact, it preserves a state of museum exhibit design from long ago so well that it managed to get audited when the museum foundation applied for World Heritage status. Now, museums are explicitly excluded, they can never be world heritage – and still Teylers Museum almost got in! Not as a museum of art, scientific instruments etc., but as a museum from ca. 1890! Let me show you…..

First, here’s a bit of history about the museum. It was established in 1778. A rich cloth merchant and banker named Pieter Teyler decided that his money should be used to do good after his death. Thus, he bequeathed his fortune to the city for the creation of foundations for the advancement of art, religion and science. Two foundations were established, one theological and one for all the rest, so to speak. Lumping poetry and physics pretty much fits the age, though, when researchers were often gentleman scientists interested in all of nature.

The first directors of the foundation of science decided to do what Pieter Teyler really had not wanted: they established a museum in his name. To be fair, however, it was supposed to be a study center that offered access to collections and library under one roof, while also serving for educational purposes. Pretty close the today’s concept of a research museum in the vein of AHMN and MfN Berlin, I must say.

Initially, the museum consisted of Teyler’s house. A pretty unassuming place, with a regular door with a small flap at eye level. Visitors had to apply for admission, and when thy got to the museum they had to hand their recommendation letters through that flap and then wait…… and wait…… until, if they were lucky, the door would open. 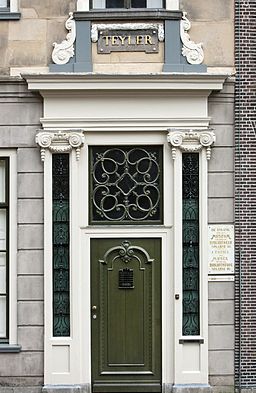 I won’t try to detail the museum’s history here – in fact, a lot of info can be found on its wikipedia page. Suffice to say here that collections sprouted up based on the research interest of the curators – whoever happened to be curator collected what happened to interest him. Thus, the museum ended up with an eclectic collection: fossils, minerals, scientific instruments, models of windmills, coins, paintings, whatnot. And obviously, the museum quickly became too small. A large expansion was constructed, and the architecture is rather impressive (although partly overdone). The entrance rotunda sets the tone, with lots of pillars and columns and marble and statues and reliefs and a gold-painted ceiling – even more opulent than the outside.

That entrance hall is really an amazing sight! It is not really huge, as you can see in the picture below, which has people for scale. But it is also not cramped with some 10 to 20 people in it (except when they are retirees – 3 of them make every place an obstacle course). It is opulent, a marvelous display of craftsmanship, a masterpiece of light and shadows! And – evidently owed to the constraints imposed by neighboring buildings, but you won’t notice that when inside – it is highly asymmetrical! The main axis takes a quite significant turn inside, but it doesn’t feel that way!

See, the rosetta’s dark grey arrow points at the next hall, Fossil Hall I – but the entrance lines up with the red marble arrow down left! However, unless you stand still and deliberately check angles, you will be distracted by the skylight and the exquisite detail throughout the room. And not just here: Throughout the museum, the decoration detail is amazing! Almost everything is carved out of wood, to the tiniest detail! The design varies, but each and very room is decorated to the fare-thee-well, to the point where you can spend an entire visit ignoring the exhibition and focusing on the rooms alone.

OK, back to the tour…… From the entrance rotunda, one can either access the museum shop in a modern extension, or go straight into the first of the two fossil halls. Fossils…… yeah, let’s go there 🙂

Need to point this out again: this is carved wood! WOOD!!!!!!

OK, now for Fossil Hall I, here seen from the “back”, through the door of the hall behind it:

This is the first of two fossil halls, and although it is a small room, what a wonderful hodge-podge of everything one can find in Europe does it contain! Right when you walk in you have to walk around a large plesiosaur mounted as if it was a coffee table – smack in the middle of the room and rather low down. Only a glass cover makes it high enough that most people avoid bumping into it, it seems. If you turn to your left to walk around it, you face this cave bear:

It just sits there, unprotected by any glass or whatever, a reminder of the old times when museum visitors were (at least expected to) behave with respect and decorum. Although…… in Bonn, the Goldfuß Museum has a copy of the old visiting rules on show, and they include such gems as “sabres must be placed in the bin at the entrance” and “unruly behaviour and noise are strictly forbidden.” So much for “decorum”.

A characteristic of Teylers Museum very endearing to me is the lack of artificial light throughout this part of the museum. Used to spotlights picking out the key specimens (or parts) of exhibits and all the rest in the (semi-)dark (with only few, usually historical museum buildings defying this rule), I must say it is refreshing to come into a room where I am not subconsciously told where to look – and where not – by some designer’s concept of illumination! Specimens’ placement is dictated by construction necessities – walls for hanging specimens,  doors for not placing them, windows to give light as well as possible. This makes for a very calm and neutral atmosphere in the rooms.

Combined with the exquisite detail of just about everything in the room (note the metal grates covering the heating pipes in the floor!), the lack of electric lights can really make you feel like a ca. 1890’s visitor!  It has the effect of making all exhibits pieces somewhat equally weighted, a stark contrast to the weighing modern lighting brings to exhibits.
The first fossil hall is followed by – well, duh! – the second fossil hall………

Uh, no – sorry! Need to come back to the entrance rotunda once more, because it is so awesome:

OK, now that I have calmed down, let’s get back on track for the Tweede Fossielenzaal (God, I LOVE Dutch – to me, as a native German, Dutch will always sound and read like some sort of semi-comical baby German [blush] I guess the same is true vice versa!).

a long table with glass cover and cabinets below down the middle, and large glass-and-drawers cabinets set perpendicularly between windows – how much more gentleman-scientist can you get?

and check out the floors, the metal grates covering the space for pipes…… and the decor of the cabinets, the glass dome covers for the mineral specimens……. The first time I came into this room I noticed a sign pointing out an important whale skull specimen Cuvier himself worked on. On that glass table you can see in the last picture. But where – WHERE???? was the specimen?

Oh, there! ON the floor below the table! 🙂 The floor!

The entire place is cramped, cluttered, there is barely any order to the placement of specimens. And there are stories upon stories about the place, the specimens, the researchers…… the most famous of which is certainly (and obviously) the one about John Ostrom and the Archaeopteryx. A story that is wonderfully told here, so I won’t repeat it here. Go read it! It is a much better and more informative read than my ramblings.

After the second fossil hall, there is the hall of scientific instruments. There is way too much to tell about it and its content, so just go and see it all for yourself! There used to be a lot of info on the museum’s webpage, but they have revamped it into one of those annoying tablet-conformal abominations, and I refuse to peruse it. Thus, I can’t tell you if all the detailed info on the various apparatus is still there.

After the instrument hall, you pass a tiny cubicle on the left that has magician’s tools from 200 years ago and the entrance to the numismatic hall, and then you finally get into the inner sanctum: the oval room!

It is a multipurpose room, exhibiting scientific tools and models of windmills and minerals and lots of other things on the ground floor, and housing part of the library and granting access to the rest of it on the mezzanine level (sadly closed to visitors these days). And the room is a sight worth seeing in itself: with its big windows, the slanting floor (it feels a bit like a ship’s cabin), the exquisite woodwork! With all the warm wood and its modest size, it is a cozy room, but at the same time it has a certain air of grandeur. And it has that grand white-and-windows ceiling that makes the ceiling shine like the sun 🙂

and on that high note, I will end this post. There are plenty more rooms, but I actually won’t mention the halls dedicated to art (Dutch masters, mostly), nor the modern annex. The oval hall is the pinnacle of museum architecture from 150 years ago, it is the fitting end to this description of the museum building. Next up will be a rather haphazard overview of some of the exhibits, before (finally) EAVP 2016 is on.